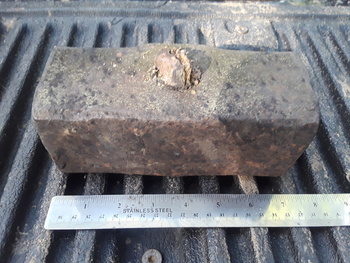 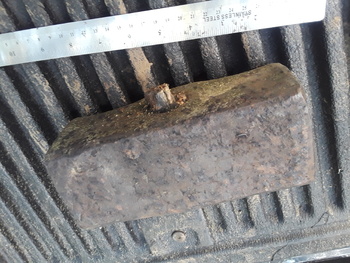 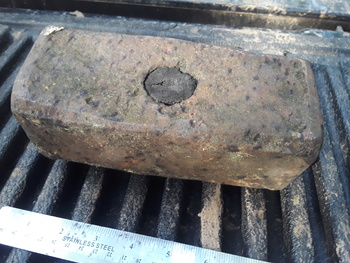 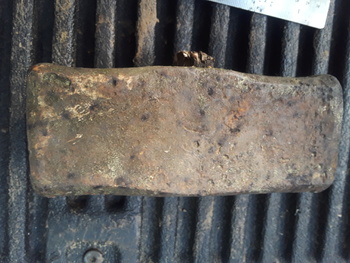 Which would otherwise be more commonly recognized as a sledgehammer head instead...it's about the same size as a (large) paver brick but probably weighs more than twice as much, 18 pounds or so. Measures about 3" square and 7-1/2" long, I haven't the slightest idea how old it really might be.

I finally "appropriated" it yesterday afternoon from one of my Sister's houses decks, where I first noticed it numerous yrs ago and it has been banging around ever since...hope the basketball hoop thing it was most recently helping to 'hold up' (as a counterweight) doesn't fall over without it there now...? ;-) Only the smallest bits of its original wood handle remain (as it was the first time I spotted it yrs ago) and there's probably a good chance that her husband [R.I.P. Steve] could have been the one that broke the handle off of it while using it to beat the h*ll outta something else somewhere, again years ago. :-) <lol>

If there are any actual maker's marks on it anywhere I haven't discovered them yet... just one more little (slightly too heavy) chunk of assorted rusty metal things I'll eventually find some fun spot for in what should usually be a flower garden somewhere around here...rusty metal chunks/pretty rocks/etc. don't require watering/weeding/maintenance after all, do they...? <giggle>