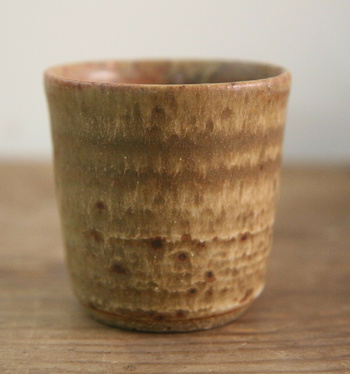 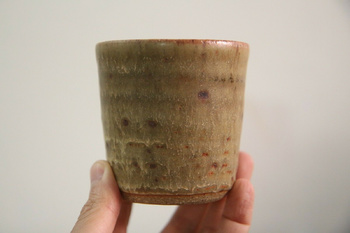 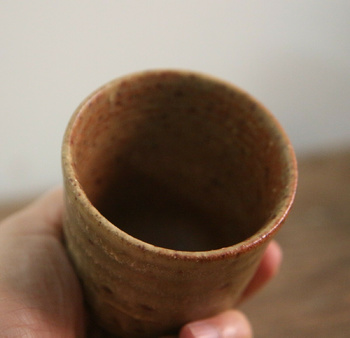 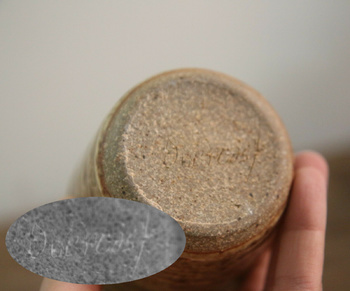 This small pottery cup is 3.25" high x 3.25" in diameter at the top. The size is about similar to a Japanese yunomi for drinking tea and it may be an homage to that style. For some reason, it took me about four months after I first posted this to CW to decipher the signature on this piece. I keep it on my kitchen counter and frequently use it to get a quick drink from the tap. Yesterday, I was washing it and turned it over and suddenly read the signature, "Overcast", duh! A quick trip to Google and I found that there is a lot of information about this artist, who has been a professional studio potter for fifty years, including his web site. I sent an email to Mr. Overcast for confirmation that it is his work. I worked up a short biography from information found on line.

Roy Overcast has been a professional studio art potter since 1968 and has a BS in pottery from Middle Tennessee State University and an MFA in pottery and sculpture from the University of Georgia, Lamar Dodd School of Art. His work has been featured in Nashville Arts Magazine, Southern Living Magazine, American Craft, Ceramic Monthly, Country Living and at Jerry Park Photography. He has exhibited widely and his work is in private and public collections around the world. Overcast has made a living as a studio potter for nearly 50 years. For a few years he owned a production studio, Overcast Pottery, in Nashville, TN where he had more than a dozen employees and made clay works for Cracker Barrel, Bloomingdale’s and Opryland Hotel. He was a member of the Tennessee Arts Commission 1973-1975. His work is signed by hand "Overcast" or "Roy Overcast", similar to the example in this post.