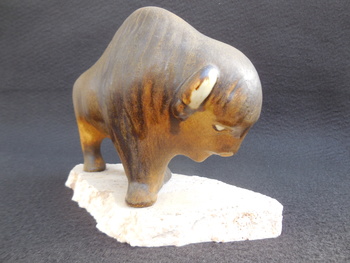 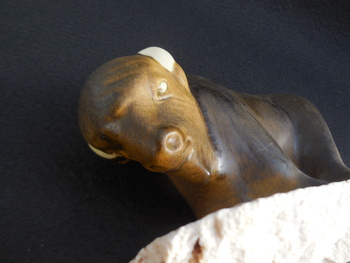 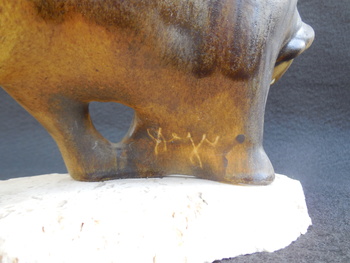 I Found this Daga Design Studio Styleized Art Pottery Bison/Buffalo on a Stone Slab Base, at the Flea Market about six months, and was reminded of it when I saw Ted Straub's Viscoloid Bison(Buffalo) post on CW, and wanted to post this one! :^D
The Buffalo is 8"long 6 1/2"high 4" at the widest, the natural shaped stone slab base is 10 1/2" x 5" x 7/8"
Here's a link to Ted's post:
https://www.collectorsweekly.com/stories/282150-viscoloid-bison-buffalo?in=activity

and here's some information that I found about the Artist, and his Studio:
Daga Design Studio was established by Maigon Daga in 1954, just a few years after arriving in Adelaide S.Australia, as a refugee from Latvia. Daga and his family relocated to America in 1964 where he continued producing ceramics from his home. In 1970, Daga opened his studio in Minneapolis where it remains to this day.In 1980 Daga began sculpting and producing the animal forms for which he has become widely known.
and a little more info:
Web page: Mike Daga
http://www.retropottery.net/2014/05/maigonis-daga.html

Note
2016-06-05 17:01:51.0
Maigonis (Mike) Daga (1923-2001) was born in Latvia, and immigrated to Australia in 1948 as a refugee, where he attended the Adelaide School of Art studying sculpture. From 1954-1964 he ran a successful commercial pottery studio in Adelaide, after which he re-located to Minneapolis in the U.S. opening a studio there around 1970. His sons continued to run the studio after his death until very recently. (The last record I can find of it operating is in 2008)

His earlier Australian work consisted of modernist, slip cast forms which this ewer style vase typifies, but he is more widely known in the U.S. for his sculptural animal forms on granite plinths. His Australian work is signed "Daga" to the base.

His Australian pieces are also very similar stylistically to those of Gunda Pottery made around the same time in Melbourne by fellow Latvian, Gundars Lusis...although I find the pieces from Gunda are a bit more streamlined and refined in their forms and finishes. It was in the U.S. where Daga really refined his style.

Thank you for looking, and thanks to Ted_Straub's post, all comments are welcome, be Safe, and Stay Well! :^) 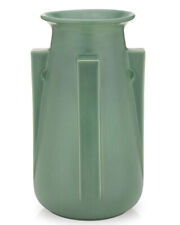 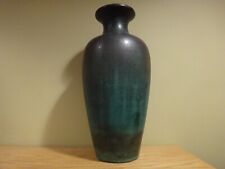