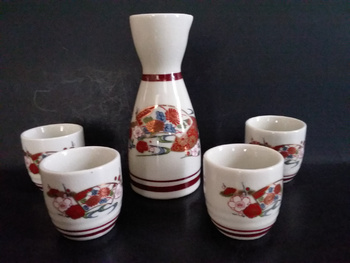 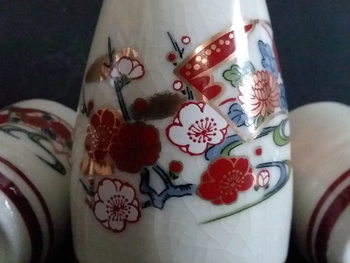 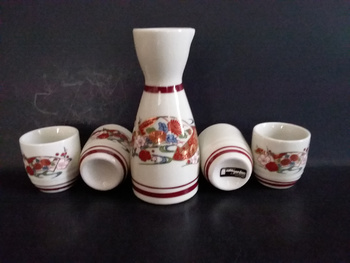 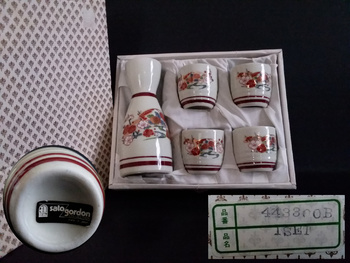 The tokkuri is 4.25" high 2" diameter at the base. The ochocko are each 1.75" high x 1.75" diameter. The tokkuri is very fine and so thin that I can see a shadow made by my finger as it passes between it and the light source, like bone china. The ochocko are substantial and I can see the construction under the glaze. Guessing the tokkuri is porcelain and the cups traditional pottery. There is a label on one cup which reads "Asahi Sato Gordon Collection". There is a vestigial label on the bottom of the tokkuri but nothing legible.

I recently bought a nice Hagi Ware sake set to replace my broken set, but it turned out to be unused and of pretty nice quality, so I decided to hold off on using it until I can determine the maker. Haji Ware is changed by use and can even be subject to mold if not dried and stored properly. At any rate, I decided to buy the cheapest boxed sake set that I could find to replace it and settled on this one for $7.50. It was not quite the cheapest set I could find but I noticed that the decoration is very similar to a good quality Imaemon cup which I purchased not long ago.

When the set arrived, I was surprised at the quality of the pieces so tried to research "Asahi Sato Gordon Collection". All I found is that pottery with this label is very common in the U.S. and most dating puts it in the 1960s and 1970s. My best guess at this point is that "Sato Gordon Collection" may indicate an American importer or a product line of an American department store or other commercial entity. There is a type of Asahi regional pottery but it does not strongly resemble this sake set. Asahi pottery is made in Uji, Kyoto, Japan. The Asahi of my sake set may, or may not, have something to do with Asahi Ware and Uji, Kyoto. There were several Asahi companies but none seemed to be associated with pottery making. I checked with a few folks in other countries and this label appears unique to the U.S. If anyone has information about the maker/importer/seller of pottery marked "Asahi Sato Gordon Collection" I would appreciate knowing it.

Update: I did find a set of mugs with only an Asahi label (not Sato Gordon Collection) in a box labled "Azuma, 415 Fifth Avenue, New York, New York 10016". Perhaps ordered from a catalog. That lead me to an article about where to buy Japanese objects in the New York Times, dated 28 December 1978:

"Azuma has six stores; the branch with the most Japanese furnishings is at 415 Fifth Avenue (889?4310). In addition to its large assortment of inexpensive ceramics, vases, lacquer ware, lamps and lanterns, Azuma has 40?inch ceremonial umbrellas for $29.98; hand painted cotton banners for wall hangings, priced from $8 to $40; bamboo screens for $100; and a large collection of decorative fans, from $1.19 for plain paper to $29.98 for a lacquered fan two feet wide."