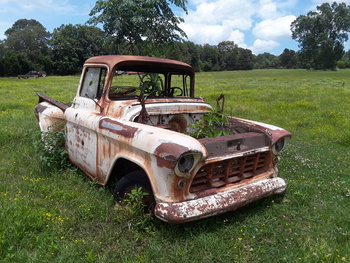 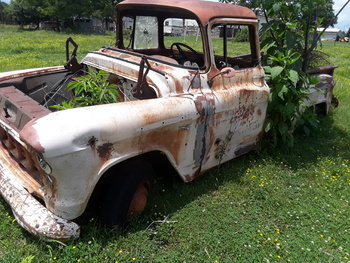 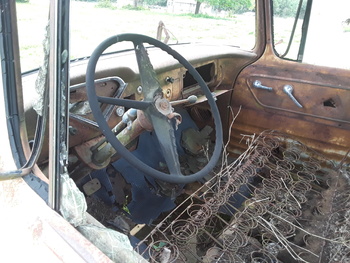 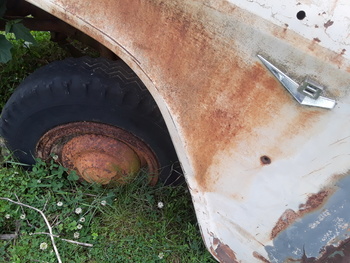 First, it ain't actually mine, it otherwise resides in the pasture out behind one of my 'sister-in-law's' house, where it apparently has been for a very very long time already. I just finally got around to taking some pics of it yesterday during a small family gathering there.

Second, I don't even know who made it or how old it really is...something about it strikes me as Ford but I could be way wrong on that...?

Its only remaining badging is the V-8 in pic 4, I couldn't make out if there's actually a brand name on the hubcap also shown there. Its engine and transmission are also long gone, the only things now under where its hood used to be are basically a battery shelf and a few assorted 'weed-trees'.

[EDIT 28May 2020, thanks SO MUCH to all who've commented below to clue me into what this old truck really is/was -- turns out I was really 'way wrong' on my FOMOCO guess?!! Here's a link to four more pics of it just posted! :-) ]

[EDIT 21Jun 2020: I've just accidentally found out some further info on this particular truck, when mentioning to my (former) partner that I'd shown the pics here. He relates two further details which I found fun -- that this truck was the very first vehicle his Father (who I never met) actually bought 'brand new' back in 1956 -- and that this truck was the very first motor vehicle he himself actually learned to drive (at approx. age 7...it is 'the country' up there after all?!) at least around the pastures, hayfields, and gravel county roads. Can 'ya imagine a typical 7yr old trying to manage the clutch and gearshift (at the very least?) on this thing??? OH, but I bet there was a whole lotta 'gear grinding' going on with all that... <LOLOL>]