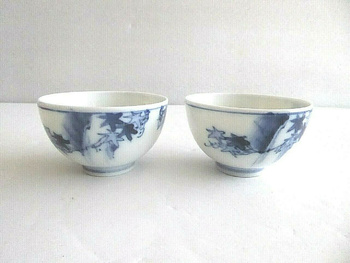 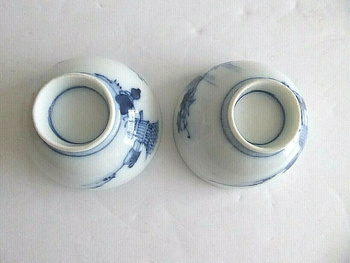 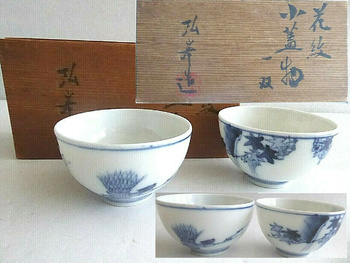 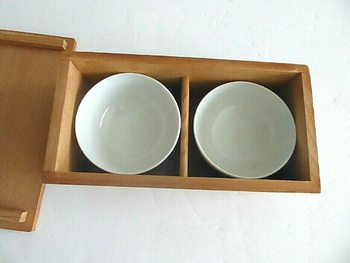 These cups are 3" in diameter and 2" high. Cups are unmarked, but the box is signed, though the stamp is very weak and I can't make it out. These cups seem a bit large for sake cups, however they may have been meant to serve a dual purpose. There are numerous imperfections in the painting of the cups, most noticeably in the painting of the lines around the rims, but there are also some sloppy places in the painting on the body of the cups. I have not seen this before on finely made porcelain cups and wonder if this is meant to be Wabi-sabi or drunken pottery painting? Not sure why someone would go to the trouble of producing a tomobako to put them in, if they were not proud of their work. I watched these on an on line auction site for some time since a tomobako was included and though priced very modestly they did not sell. The seller finally added an option to make an offer so I offered half the already small amount they were asking and was surprised when they accepted my offer. After much head scratching, I have started to wonder if the cups might not go with the tomobako, though they are a perfect fit. The tomobako seems to have quite a bit of age to it based on the surface patina which does not extend to the interior. Not sure what to make of these. Opinions welcome.

"In traditional Japanese aesthetics, wabi-sabi (??) is a world view centered on the acceptance of transience and imperfection. The aesthetic is sometimes described as one of beauty that is "imperfect, impermanent, and incomplete". It is a concept derived from the Buddhist teaching of the three marks of existence (???, sanb?in), specifically impermanence (??, muj?), suffering (?, ku) and emptiness or absence of self-nature (?, k?).

Characteristics of the wabi-sabi aesthetic include asymmetry, roughness, simplicity, economy, austerity, modesty, intimacy, and appreciation of the ingenuous integrity of natural objects and processes."

These cups might also be considered to be sometsku, or blue and white painted pottery, a style the Japanese copied from the Chinese.