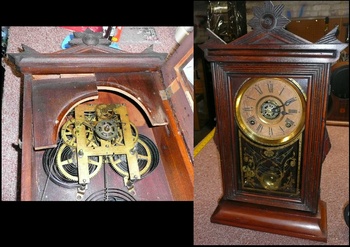 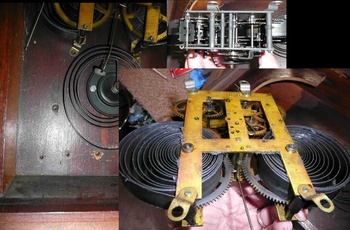 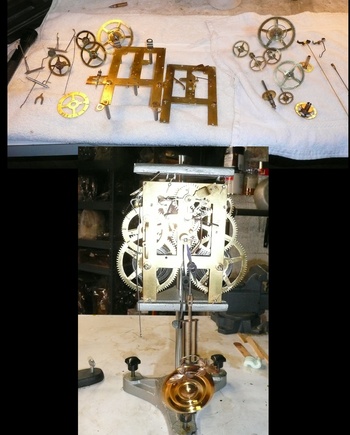 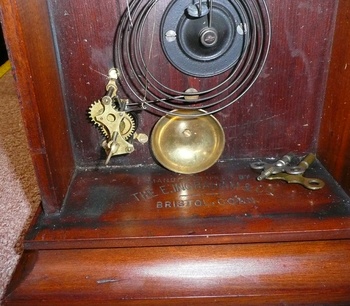 Another brand new member just recently posted a clock which appears to be an Ingraham "Acme". It's difficult to know for sure because it looks like some of the case elements and parts have gone missing. This happens all too often to old-timers like these.

The Acme was from circa 1882 and had an 8-day Time and Strike Movement. Ingraham also offered a separate Alarm movement with this model.

The photos I've uploaded here some of the Before and Afters I took during the restoration of another(?) Ingraham Acme Clock for a friend and neighbor.

When my neighbor brought his family heirloom to me, the case was broken into several pieces, the movement was absolutely filthy and not running. It looked as though the movement had been hosed down with some type of spray "lubricant". Perhaps WD-40, I don't know. And there was thick, dirty grease slathered all over the mainsprings and surrounding movement plates. To make matters worse, a separate Alarm Movement, which, as previously mentioned was optional when the Ingraham Clock Company offered this clock to the public, had gone missing. I could tell by the little alarm setting dial in the middle of the clock face along with the screw holes in the case which were left behind when the Alarm had been removed and not replaced for some reason.

On the plus side, all of the rest of the clock was there and original along with the glass tablet and decorative pattern. The dial looked good and the current owner actually likes these antiques. Some folks would have simply tossed it in the garbage can.

I got very lucky and did manage to obtain an appropriate replacement Alarm Movement for this model. You just never know with projects like this. Sometimes what you need pops up right away. Other times, you can be waiting for months or even years before what you need comes along.

I cleaned and overhauled both the 8-day Time and Strike main movement along with the replacement Alarm Movement. I restored the broken case using era appropriate hide glue. With everything cleaned, repaired and restored, I put it all back together, tested and returned it to the family it has been with for several generations now.

Doug was very happy with his Acme and I'm sure it will be in good hands for at least one more generation.