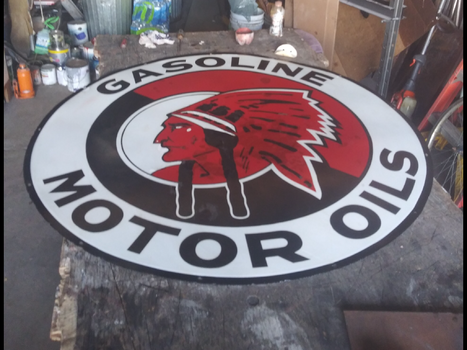 We got this beautiful 5’ Red Indian porcelain sign from a friend in NE Canada and it was a nightmare getting it to Utah but we finally got it done through a freight forwarder based in Israel of all places. Tricky with 11 hr time difference to communicate, to say the least! While Red Indian was the Canadian Brand name the actual oil company was the Mccollough-Frontenac Co started by the merger of two oil Companies in 1929. By 1941 Texaco Canada had a controlling interest in the Company and changed the brand name to Imperial.
After a lot of cleanup and elbow grease our new sign looks pretty good.
FYI: Frontenac was the name of the French Administrator in Quebec Canada in the late 1600s that defended Quebec against King William of England and is the family name of one of the partners in the original Oil Co mergers that started Red Indian