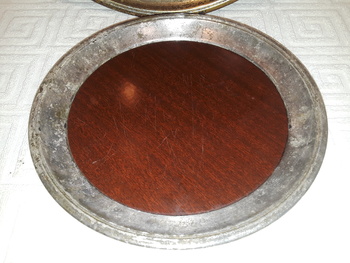 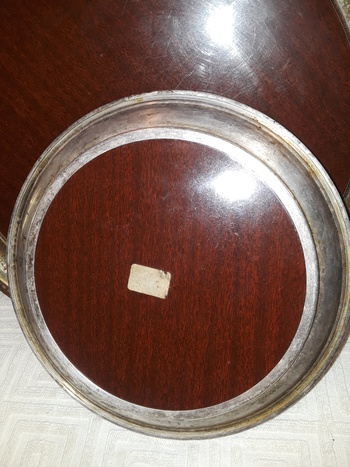 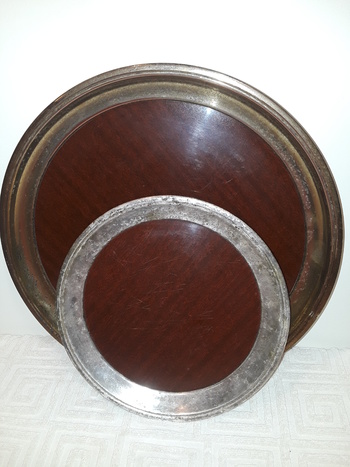 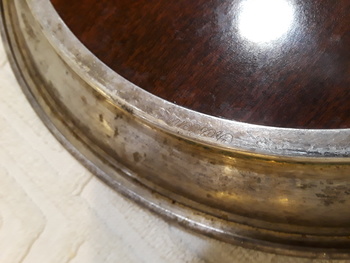 This one actually came from the "cleanout house" where it was recovered from the thoroughly disgusting piles of crusty rusty cookware under the kitchen sink. (which, for the most part except for the cast iron went right into scrap metal load #1) Frankly I figgered it was probably already a 'goner' when I snagged it anyway, otherwise thinking that it was at least a (close, anyway) match for another larger tray I've had for years.

And WHADDA 'YA KNOW -- it's not only "close", but a smaller version of the same exact thing by the same exact maker?!! <happydance> Pic 3 shows the two together, my older one has already started to re-tarnish itself since I showed it a few yrs ago. This one measures 10" across and has the exact same CRESCENT logo on its underside rim, though if there's an additional hand scratched number (like my other) I can't make it out now. This one *does* have the remains, now completely illegible, remains of its paper label on its underside too. Note also that the Formica pattern exactly matches, too!! :-)

I've only today tried to clean it as gently as possible with detergent and a (blue) scrubby sponge to remove at least most of the grease/grunge it had otherwise been subject to, hopefully without doing any further damage to it. It has obviously led a much more difficult life than its new 'big brother', but I'm still sorta hoping it might not be a total 'lost cause' once I get a chance to clean/polish on it some more...??