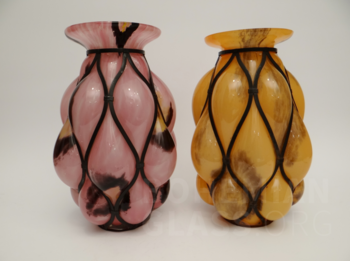 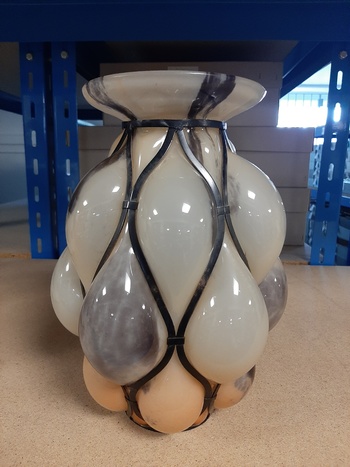 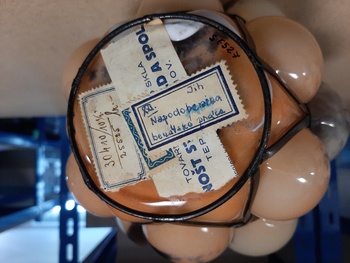 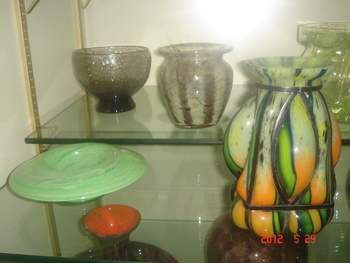 Today I managed to get photos from a vase produced by the Teplice glassworks Ernst Steinwal & Co. from the Museum of Glass and Bijouterie in Jablonec (photo 2). This vase is mentioned in the book Das Böhmische Glas Band VI - p. 65, pic. VI.69. The vase is provided with a sticker by the glassworks Arnošt Steinwald a spol. Teplice-Šanov (Arnošt is the Czech version of the name Ernst) and also a numerical designation - possibly the product number, decor, shape (?), the inventory number of the Museum written on glass, and a sticker with the text in Czech "Napodobenina benátská práce" (Imitation of Venetian work) (photo 3) . In photo 1 there are 2 vases from my collection, one of which has a "semi-circle" mark Czechoslovakia at the bottom. In the last photo, the vase in the Glasmuseum Passau collection is marked as a product of the Ernst Steinwald & Co. glassworks.
I think this is a serious argument for changing the general opinion that these vases, collectors called "Caged", were not made by the W. Kralik glassworks, but by the glassworks Ernst Steinwald & Co.

For the provided photos from the Museum of Glass and Bijouterie Jablonec I thank the main curator dr. Petr Nový.