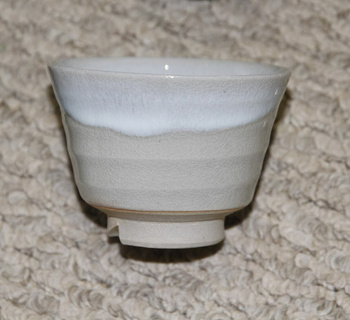 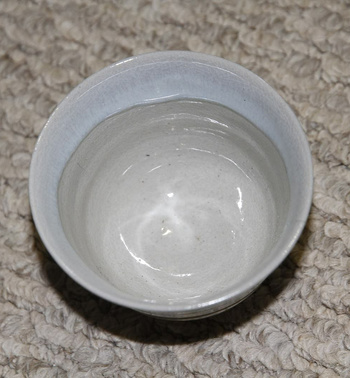 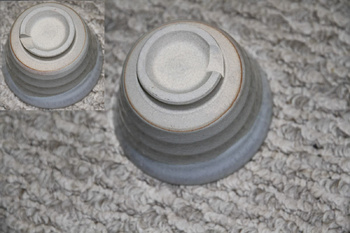 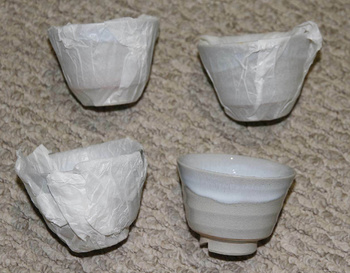 These cups are 2.5" high x 3.5" diameter at the top. They are Hagi Ware and unmarked, so the maker is unknown, but do have the "chip" in the bottom which traditionally signified that they were meant for sale, not as gifts. They appear to be high quality pieces. They are brand new, but date from the 1970s and were never used. One has a hairline crack which occurred in shipping, but the other three are undamaged, still wrapped in the original paper they were sold in. These were $1 each, so hard to pass up. I think they are for Sencha do.

"Hagi ware (Hagi-yaki) is a type of Japanese pottery traditionally originated from the town of Hagi, Yamaguchi, in the former Nagato Province.

The origins of Hagi ware can be traced back to the arrival of Korean potters to Hagi, a quaint town situated in Yamaguchi Prefecture on the Japan Sea, following Japan’s military invasion of the Korean peninsula in the late 16th century. As a result, a large number of Korean craftsmen were abducted and transported to Japan, where they played a crucial role in establishing new pottery types such as Satsuma, Arita, and Hagi ware ("hagi yaki").....

One might also notice a chip on the bottom, which was deliberately made by local pottery makers to sell the ware to merchants instead of presenting them as gifts to the Mori clan during the Edo period. Even today, Hagi ware continues to evolve in a response to the demands of customers, the aesthetic preferences of Hagi artists, and the environment."

"Normally when we think of Japan’s tea ceremony, the one that most often comes to mind is ‘cha no yu,’ or the tea ceremony involving matcha. Nakai sensei also does the cha no yu ceremony, but the sencha do she also practices is much harder to find. She sits in front of us wearing her fukushitsu apron, and begins to explain as she pours the first round of tea. Sencha is Japan’s most popular tea. About 80% of all tea produced in Japan is sencha. "

Leaving these a mystery in case someone knows, or can guess, the maker. 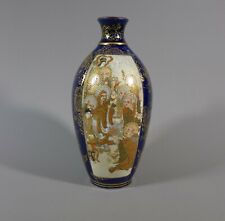 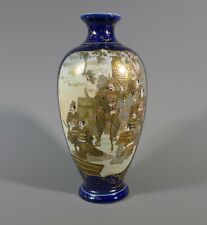