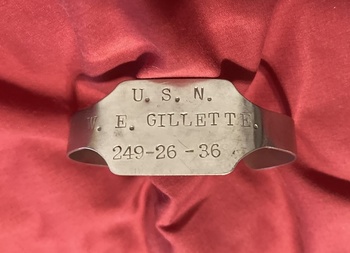 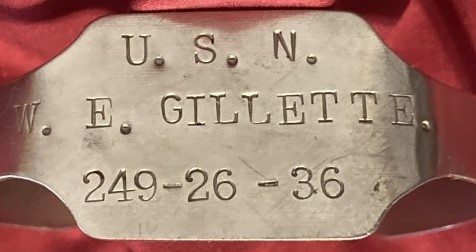 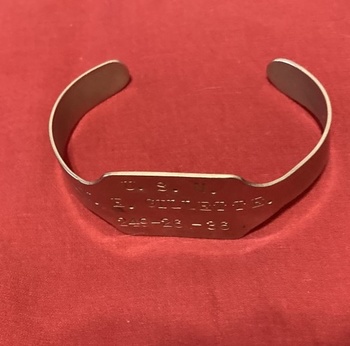 I collect identity bracelets and am glad that I didn't pass on this one. Most of my collection is trench art aluminum pieces.

This one is stainless steel and is very much a "plain jane" version with "USN, name, service number".

The "rest of the story" on the owner has made it one of my favorite pieces.

At first I was disappointed that Gillette had missed the Normandy Invasion, but the disappointment ended when I realized that he was only 17 years old when he began his service on the USS Texas.

The USS Texas was stateside in New York (arrived 14 SEP 44) to undergo a refit/ repair period. I can't imagine being a 17 year old on a ship that had just participated in European Invasion landings. I am sure he got all the worst details and regular ribbing from the "old salt" war veterans.

After a 36 day repair period and refresher cruise, the battleship was ready for the Pacific. Transit to the Pacific was through the Panama Canal, included a stop in California, maneuvers in the Hawaiin Islands, and invasion rehearsals in the Mariana Islands.

The Captain is credited with saving lives and preventing ship damage by keeping the crew in battle stations.

Gillette was on the Texas until the end of 1945, when he was transferred to the USS Duluth. Gillette finished his service in MAY 1946, not yet 20 years old!

My item, do not copy or use my photos.