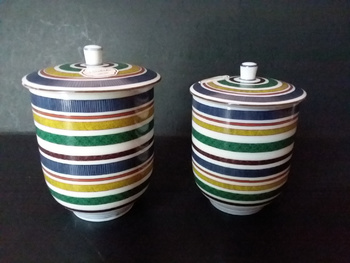 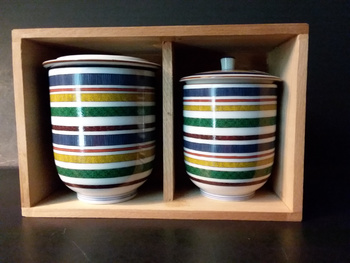 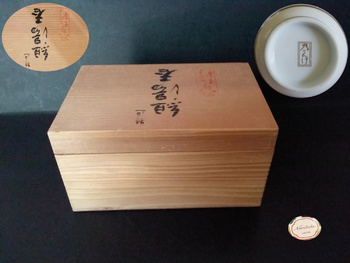 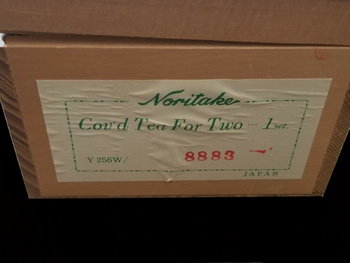 These lidded yunomi are, minus the lid: Husband yunomi 3.75" high x 2.75" diameter, Wife yunomi 3.25" x 2.5" diameter, with tomobako. The difference in size between the two yunomi is greater than any other set in my collection, or which I have seen. The larger yunomi will not fit in the tomobako unless the lid is turned upside down. Both yunomi are very thin porcelain. The gold mark on the bottom, which reads "Noritake" indicates that this set was made in 1975 for domestic use in Japan. I could not find an example of the sticker on the lids on the site linked below. At some point, this set was apparently exported, or perhaps more likely, sold in a duty free shop in Japan. I was in Japan about this time and a variety of Japanese wares which were normally not exported could be found in duty free shops. This set is NIB, never used. I have been doing a bit of research, unsuccessfully, to discover why some yunomi have lids. This appears to be an old fashioned concept, today, so a lid may be an indication of age.

Noritake Collectors Guild: http://www.noritakecollectorsguild.info/bstamps/index.html , a great site if you are interested in Noritake china.

"1975 Noritake Sticker used for Japanese style tableware with over-glaze painting. The image on the right used a solid blue background with white text and bordered by a blue frame. The right side showed letters and frame only printed in gold - Both marks meant 'Noritake'. Used on items produced for the Japanese Domestic Market."