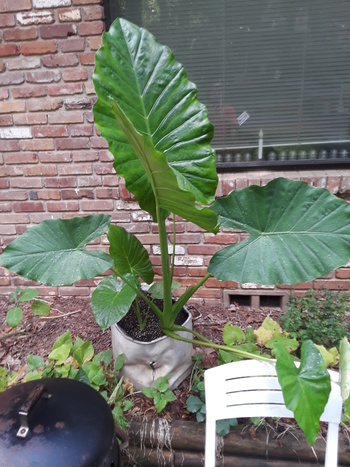 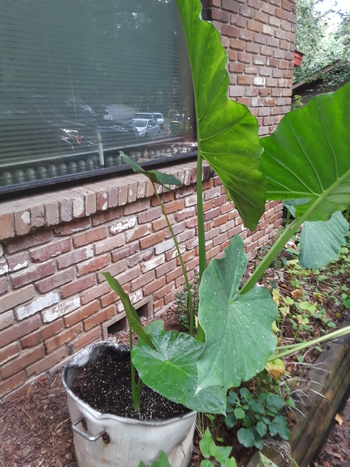 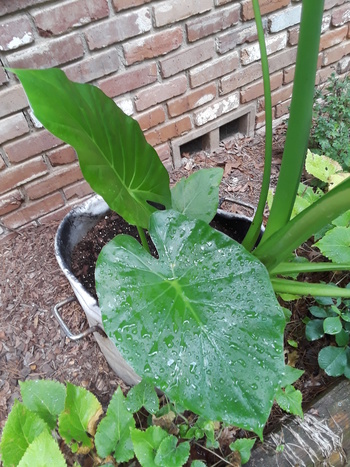 I know -- I know -- lately its been way too many (further) pics of both Phre5d here *and* Oreo puppy -- but the both of 'em are just currently a whole lot easier/more convenient/quicker to grab photos of than any of the otherwise still copious piles/boxfuls of "other fresh acquisitions" that continue to build up around here nearly daily. All that stuff generally takes more time/work to at least make an attempt to clean off/research/etc before it ever gets to the 'photo' part (and write a stab at a description of) to properly show off...while my daily life also continues to become ever so slightly crazier for a whole host of completely different reasons, some of which all y'all can likely guess. [round #2 of virus testing tomorrow, still should be neg but WEAR YOUR MASKS Y'ALL NO MATTER WHAT, PLEASE??!!]

OTHERWISE. A few more pics of Phre5d the elephant ear in my front yard -- and his Jr. -- as of this afternoon after a rain cloud blew over. Pic #1 & 2 is Phre5d Sr.'s newest right in the middle -- like every other 'new one' he's shot out since going to live outside it is even larger than any previous he's yet produced. The two smallest ones leaning on the chair back (pic 1) and one single still kinda small leaf behind the new one (pic 2) are in fact what *were* his only three leaves when he got moved outside a few months ago.

Pic 3 is now Phre5d Jr -- HE is also already exceeding expectations in his own growth with 3 smaller (in height) leaves, but once more with each new one outdoing itself to be larger than the previous one -- the biggest of those in that pic is indeed the newest one (by about 2 days) already more than twice as big as Jr's first little leaf that only appeared in its then singularity a couple weeks ago.

There's where most of the rest of his (their) story originated here most recently if anybody is just coming across this for the first time and cares to find out more 'backstory'... ;-) :-) :-)