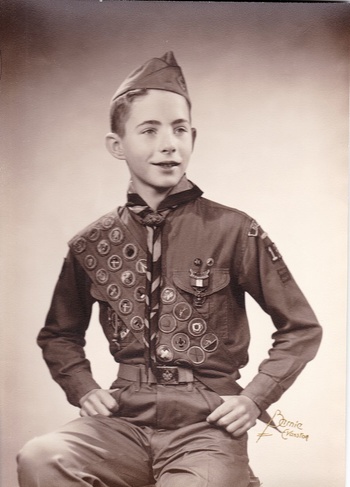 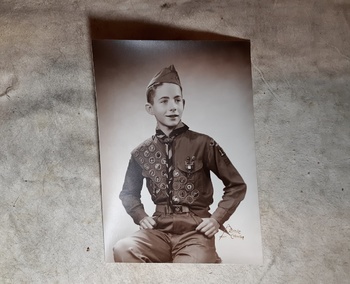 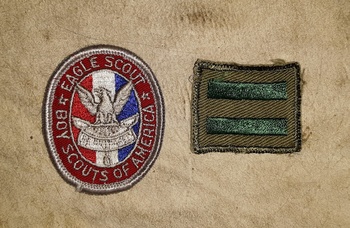 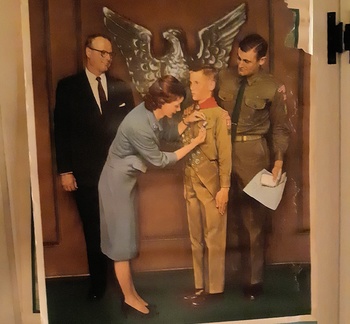 When one makes the rank of of Eagle it is time for an Eagle Scout photo. This calls for a professional photographer and prints and so on. This is a 5" x 7" print from one of those. There are tape marks on the back so it didn't get a frame but was worthy of display. A frame back then would be almost a dollar. The photographer was Bernie Cranston who stamped his name in gold on the lower right hand corner. You can feel the indentation of the stamp.
This is a fine photo with a nice sepia tone. Plus the scout looks like a proper Norman Rockwell Boy Scout. Seems to be a bit young to make Eagle as does the scout in figure 4 which is a Rockwell painting.
The Scout is a Patrol leader which is the patch seen in figure 3. The Eagle Scout rank patch is the one used in the 1960s. This photo is from the 1950s or early 1960s so there is some chance he would have had this patch but probably the earlier one.
The figs are out of order as I describe them but fig. 2 is a photo of the photo. It is a bit not quite flat. Hopefully I can find a nice simple vintage frame for it.