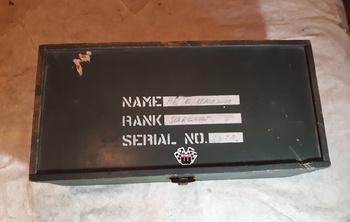 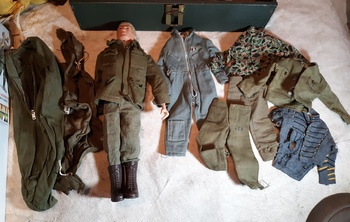 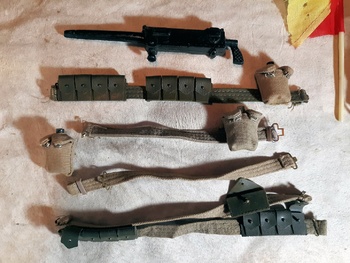 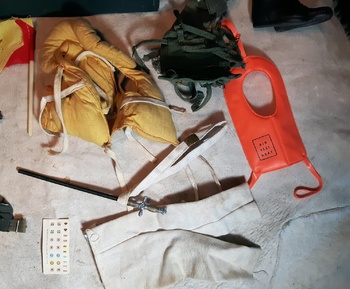 This was my big exciting buy from the Long Beach Flea Market from a couple weeks ago. I didn't realize how good it was until I went through it for the photo shoot tonight.
First the Footlocker, originally owned by Pete "Pee" Brown. His Joe was a Seargamt.
Next the GI Joe and a bunch of uniforms. With this many uniforms I think Pete had more than one Joe. There is the Air Force scramble suit, Marine and army uniforms, Cadet tunic, and a tent and sleeping bag. The GI Joe is the 1970 Man of Action. This one has the blond hair head that was used for the Talking Astronaut. They made more heads than talking astronausts thus some of the Mean of Action have blond hair.
Photo #3 is belts with canteens and first aid pouches. Maybe about $40-$50 worth of belts. Also there is an Irwin machine gun that came with vehicles made for GI Joe by Irwin. These were official GI Joes made under license by Hasbro. This along with the belts are worth what I paid for the lot.
Wrapping it up are some this and that. The good pieces here are the yellow puffy life vest on the left and the cadet pieces. The cadet sword, sword belt and pants.
Now the exciting thing will be how I dress up this Joe now that he has boots