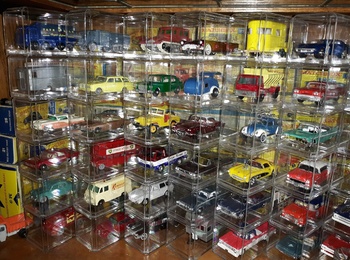 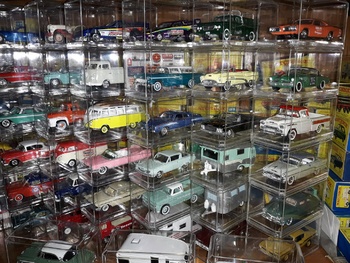 I have been buying these little acrylic (could just be plastic) cases for the last year or so. Recently I bought several cases of them to just finish the job. Well actually the job is never finished but close enough. These are all 1;64 scale die cast vehicles which is basically to say they fit in these cases. Back in the old days of Matchbox they were various scales but same size. The typical passenger car model was about 1:64 scale so 1:64 scale is what it is called. The current companies like Greenlight, M2 Machines and Auto World are making true 1:64 scale vehicles. Auto World even has it on the packages.
Note I have them stacked slantywise. I tried stacking them nice and perfectly side on view but that turned out badly. A slight bump caused them to fall down and go boom. Luckily I only had about 12 stacked up when that happenned by several cases were damaged with a scuff or two on a couple models. The slanty thing is working quite well and I can even move them around a bit without the domino effect so all good.