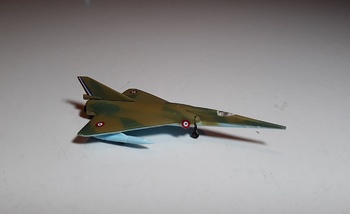 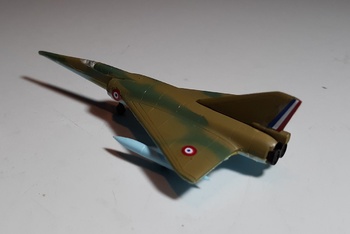 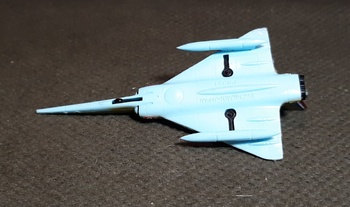 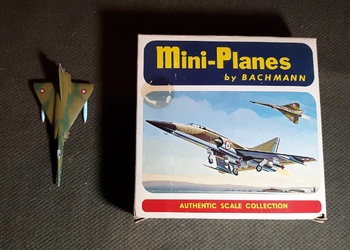 The Mirage IVA was a French atomic bomber. That is to say it was designed to drop atomic weapons. Iy had a long range but only long enough for a one one trip to Moscow. Not all that important as it more a deterrent than something actually used in that role. It could also carry 16 - 1,000 pound conventional bombs. Eventually it was used for electronic warfare and reconnaissance. France planned on exporting it but no buyers so France is the only user. Yes it was fast Mach 2.2.
Now for the model it is typical of an early Mini-Plane without many moving parts. On the side of the box it has "Moving Parts" and Retractable Landing Gear". The retractable landing gear are the only moving parts. It has the drop tanks for extra fuel on on the wing.
The box has great artwork. This is an early box perhaps late 1960s. Later boxes were window boxes where the actual model could be seen. The artwork on the box is quite nice. On later boxes the artwork was on the box and there was a dotted outline to cut it out along with information about the model. I think these early boxes look better. Others like this have a tab for hanging on a peg but this lacks that so I am thinking this is a first generation Mini-Plane. This one was made in Japan and later ones were made in Hong Kong.
Hmmm my previous posts here and #6 and 7 on Google which is kind of cool.
PS these are plastic and rather fragile.