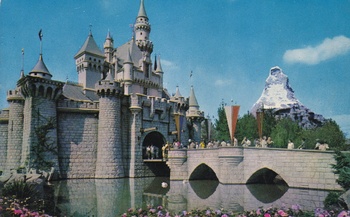 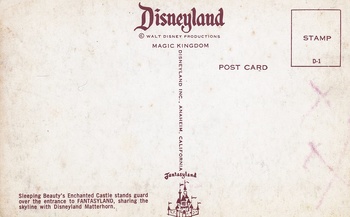 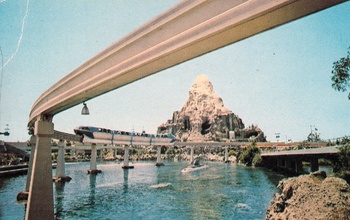 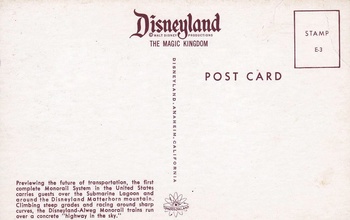 Oh the great castles of Europe. This isn't one of them. It is Sleeping Beauty's Castle at Disneyland which is the focal point of Disneyland and the entrance to Fantasyland. Actually there is a traffic circle in the center but this is the focal point looking down Main Street. The4y actually have rooms there but they are not free. Anyway it looks quite nice. The rides in Fantasyland tend to be for smaller children aside from the Matterhorn. What a perfect time for a new paragraph.
The second postcard features the Matterhorn along with the Monorail and the Submarine ride. Almost forgot to mention the Skyway to Tomorrowland. You can barely see them but they are the reticular buckets used from 1965-1994. It used to go through the Matterhorn Mountain and after it was removed they plugged up the holes in the mountain. I t6hink it is made out of fiberglass. As for the Matterhorn it is a rollercoaster and probably the most popular ride at early Disneyland. There are two tracks, one is the Fantasyland and the other Tomorrowland. You can see the Matterhorn from the Santa Ana Freeway which goes along the east boundary of Disneyland. Seeing the Matterhorn was a big deal when driving by on the freeway.
Let me see if I can narrow down the year with the Monorail. They have different versions of the trains. This looks to be a Mk 1 or II or III. The Mk IV replaced it in 1976 so this postcard is from sometime before 1976.
Last is the Submarine Ride the actual name is Submarine Voyage. The stinky diesel submarines were a bit stinky but better than Finding Nemo the new version. There were various underwater exhibits, nothing fancy, most notable were mermaids and two giant squids. One on either side. Now it is a sort of 3Dish video thing.
Now if I can find a postcard of the original burning settler's cabin.