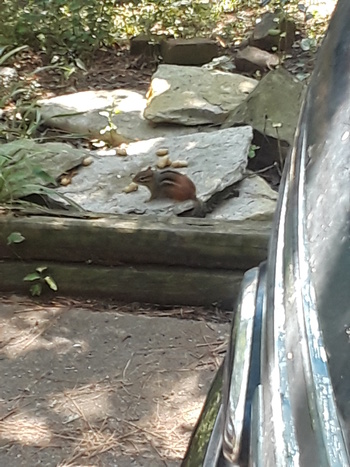 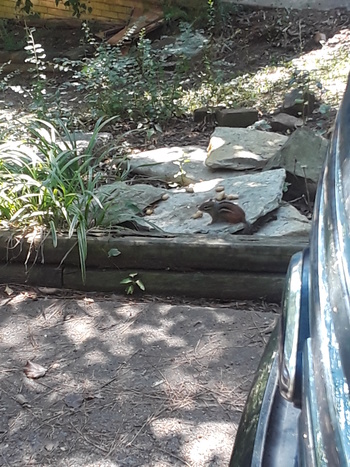 About a week or so ago, my partner told me that he thought he'd spotted (momentarily, of course) a little chipmunk darting in/out/under a random little pile of flagstone rocks otherwise laying in the 'flower bed' beside my driveway earlier that day. He, then, started to leave a little handful of shelled nuts out on the same rock every so often, which always promptly disappeared rather shortly. Squirrels (smallish gray ones usually, unlike the larger brown ones common in IL where I grew up) are frequent inhabitants of my neighborhood/yard -- chipmunks OTOH, I didn't think we really had here...I guess I might have been slightly wrong about that...?

Pics here are when I pulled into/parked in my driveway at lunchtime today, and this little guy (?) just remained sitting up on the rock letting me grab these quick (zoomed too much, hopefully not to fuzzy thus) pics before disappearing back under the rocks again. No idea if it is actually the 'momma' with a few more babies still hiding down under there (my partner also swears he's seen at least one or two other little 'faces' occasionally nearly visible under the rocks if not being brave enough yet to come out?) so there might even be a little 'family' somewhere down under there...?

Meanwhiles I've been certain to walk Oreo puppy back and forth on the *other* side of my truck lately, though next-door-neighbors lovely little Lily kitty (an indoor/outdoor baby her own self) has also absolutely noticed something going on under those rocks too...yesterday morning when I left for work she was sitting atop the very same rock we're still leaving random handfuls of nuts on, staring intently at something I couldn't see myself until I otherwise distracted her and ran her off... ;-) :-)