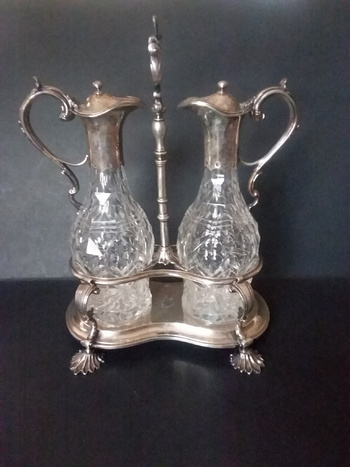 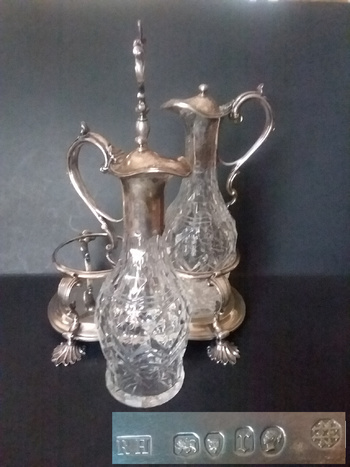 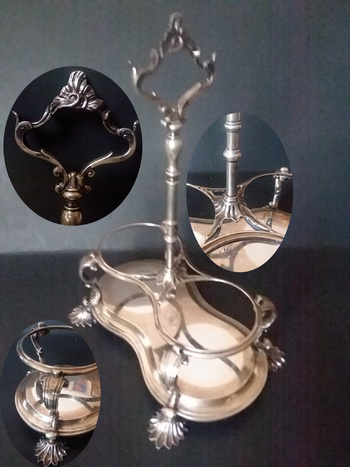 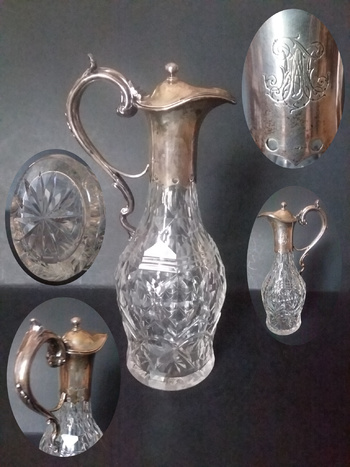 This sterling silver cruet set is 12" high x 7" wide and 5" deep. A crest is present on every piece and every piece is stamped with the same hallmarks. I have never weighed it, but it is a heavy chunk of silver and glass. I am wondering if it is bit finer than .925 silver as I have had it sitting in a cabinet for about twenty years and it has only minor tarnishing even though I have never polished it. My aunt gifted this set to me in 2000 when she was downsizing. I once took it to an Antiques Roadshow and the gentleman who appraised it said it was the nicest thing that he had seen that day. The silversmith was Robert Hennell IV of London who was active 1869-1887. There is one stamp which I have not been able to identify, the stamp all the way to the right. It may have been the personal mark of Robert Hennell IV. Left to right: Maker's Mark (Robert Hennell), Lion Passant (Assay stamp: London and other assay offices), Leopard's head uncrowned (Town mark: London 1821-), Date mark (r = 1872), Duty Mark (Queen Victoria: London), (?). I have never used it, but my aunt used it for serving liqueurs. She found it in a shop in Vienna, Austria just after the end of WWII while visiting her husband. My uncle was a Colonel in the Combat Engineers and was in one of the first groups of American soldiers to enter Hitler's Eagles Nest, but that is another story. He was stationed in Germany for a couple of years after the end of the war.