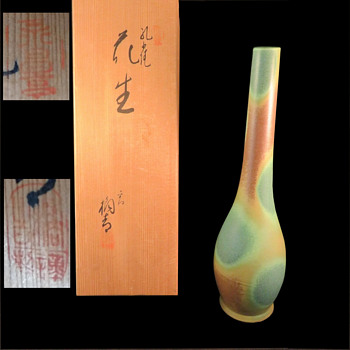 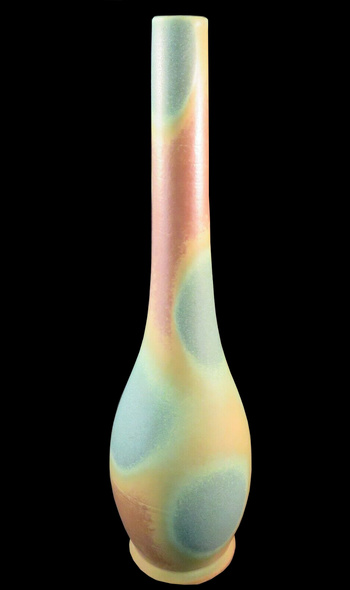 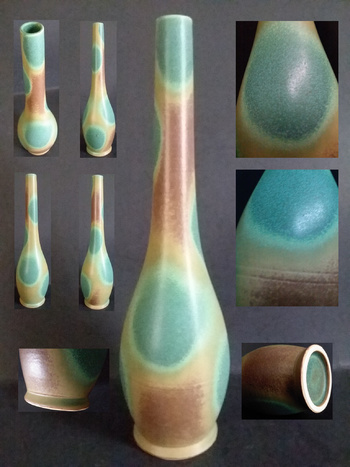 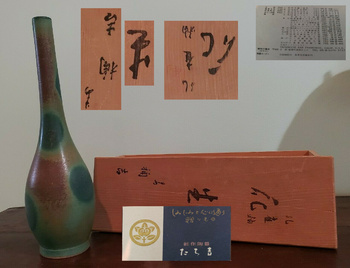 This Japanese tsurukubi, or crane necked, bud vase is 9.75" high x 3" at its widest. I bought this from a lady in Milwaukee whose father was stationed in Japan after WWII and whose uncle was stationed in Okinawa in the 1950s and 1960s. Both were collectors and she inherited their collections and is uncertain about which man owned this vase. The colors and shape just seemed very odd to me so I decided to add it to my pile, since it came with a tomobako. Maker unknown. The small white spot in one image in image 3 is a flaw in the glaze, not a damage.

Update: October 2021. I found another example of this vase which included a card for Tachikichi an upscale Japanese department store. The writing and stamp on the tomobako of the Tachkichi vase is completely different from the first vase, though. I found three sources of information for Tachikichi; Wikipedia, Modern Japanese Pottery Marks Blog and the Tachikichi web site. Since their wares were popular as luxury gifts and the text on the tomobako of the two examples I found is different, it may be that these were gifts which is why the inscriptions are different. So, more information but the identity of the kiln that made the vases uncertain.

"Tachikichi Corporation (??????? ???????????? kabushiki-gaisha tachikichi) is a Japanese pottery and porcelain manufacturer and seller[1] with more than 260 years of history. Its headquarters are located in the Shimogy?-ku ward of Kyoto.

The company was first founded in the center of Kyoto in 1752 (Edo period), under the name of Tachibana-ya Kichibee (?????), in the vicinity of the intersection of Shij? and Tominokoji streets. In 1894, its 8th generation owner changed the business name to Tachikichi.[3]

Its products, in particular as gifts, enjoyed great popularity, reaching sales of more than 20 billion yen during the Japanese asset price bubble period. However, in the period after the bubble collapsed the company experienced financial difficulties, due to a decline in sales of luxury products and pressure from cheaper products from abroad.

The company continues to be a retailer of modern and traditional Japanese pottery and porcelain.[3] In February 2015 the company joined under the umbrella of major investment fund New Horizon Capital.[4] It was reported that the fund would invest approximately 1 billion yen to revitalize the administration and help preserve the legacy of a long standing traditional business."

http://modernjapanesepotterymarks.blogspot.com/2011/05/tachikichi.html
" TACHIKICHI (???) of Kyoto
Tachikichi is a Kyoto based company that sells pottery and tableware. It was founded in 1752. Its wares are taken from many kilns throughout Japan, highlighting many types of Japanese porcelain and pottery. Tachikichi products are made specifically for them and carry the Tachikichi mark. Sometimes the name of the actual kiln will be on the wooden box, if it comes with one.

They sell products from various regions 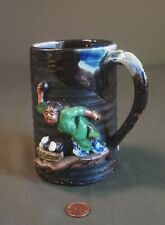 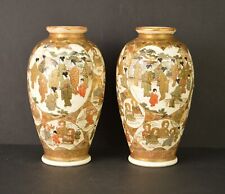 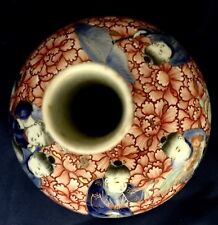