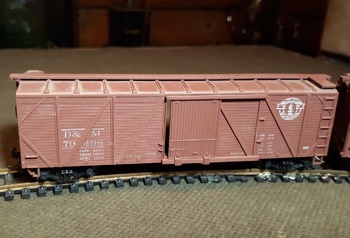 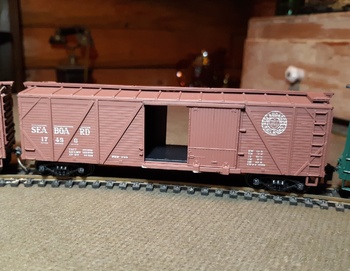 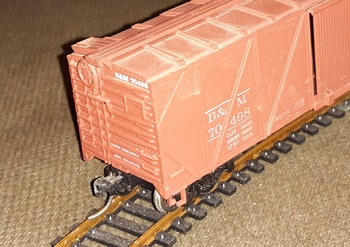 One thing I am on the look out for is 40' boxcars is HO scale. My trains are mostly 1950s/1960s and the 40' boxcar was the most common car. Plus the typical train is made up of like cars, not just 10 random types of train cars. Boxcars are nice because they can be all sorts of random roads unlike oil cars or ore cars. Boxcars are owned by the railroad while oil cars are owned by the oil companies. For some reason any reason get pulled by other railroad companies.
These are wood bodies boxcars (plastic versions of course). Wood bodied boxcars were banned in the 1960s as they splintered when in a wreck. It was a soft ban so they got phased out. The corrugated steel ends were introduced in the 1930s so these cars can be pulled by steam or diesels locomotives.
The nicest feature of Athearn train cars was a low price with high detail. Far better than Tyco or Life-Like. They were sold as easy to build kits, you just need a screw driver for the trucks and everything else snaps together. In the last photo the Kaydee coupler can be seen. These are more realistic than the earlier couplers although harder to use for model rail roaders. They do stay together well but a bit trickier to couple and uncouple.
Got a refer car coming. I'll bet everyone is excited about that.