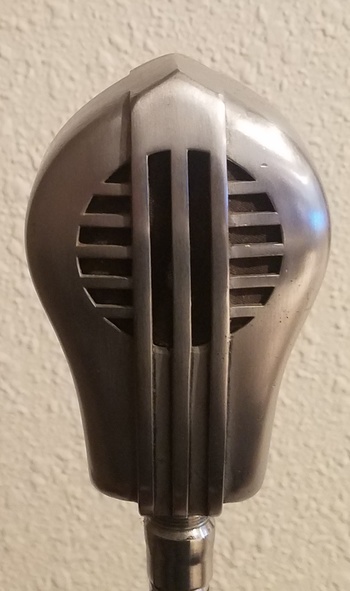 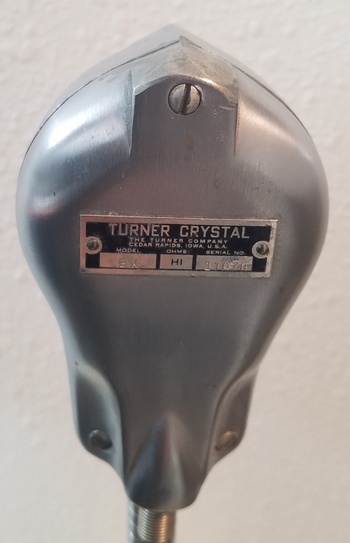 I believe this microphone dates to the 1950s?

So here's the good and the bad.........
I artistically assembled these pieces. The microphone is real although it originally had a round piece on top that could be used as a hanger. This piece was broken so I modified it. The microphone boom is real and vintage. The base is actually a vintage lamp stand. I used decorative antique hardware to attach the base.

My father was a ham radio operator W7BUN. He was an icon in the ham radio community. He repaired radios in the basement as well as teaching license classes, digital fundamentals, Crystal troubleshooting and other classes. The basement was full of parts for repairing radios.
My father's main station was a Collins set up. These particular microphones were used with Collins radios in the 50s. This was probably a spare for parts since it was broken.

September of 1952 found the company struggling to survive. Microphone sales at about $240,000 were not enough to keep the plant going although subcontract work for Collins Radio helped (The export operation brought in about $100,000 of the mike sales). As microphone companies went, the Turner company ran a poor fourth place among U.S. mike manufacturers (Shure Bros., ElectroVoice, and Astatic). Since the conversion of war production to civilian output, the company tried to expand the product line. The most recent effort was a TV booster in 1951. Result - minimal sales. After years of trying to get a license from Brush Development to make crystal phonograph cartridges (standard items with the other mike companies), Turner succeeded, only to find the industry shifting to magnetic units which was just another disappointment.