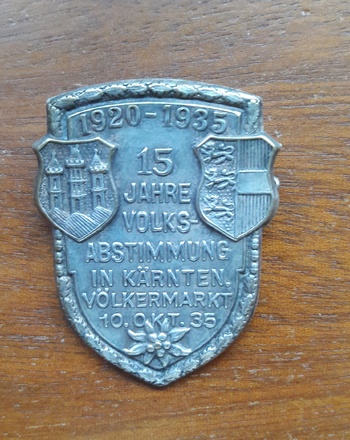 Here's an unusual one. This is a badge for the town of Völkermarkt, in Austria commemorating 15 years since the 1920 referendum.

After the defeat of Austria-Hungary and the Habsburg dynasty at the end of WW1 there was a rise of new states and countries within its former empire. Some fitted neatly into preexisting borders but others caused more of a problem. Among these was the newly formed Kingdom of Serbs, Croats and Slovenes - Or as it is better known, Yugoslavia. To determine the southern border with Austria a referendum was held. The people of Völkermarkt had a choice - to vote to join the new Yugoslavia, or to move the border north so the region became part of Austria. 59% chose Austria. So the region was annexed on to Austria.

Even after WW2, Tito and the disintegration of Yugoslavia, the border has remained the same and now separates Austria and Slovenia.