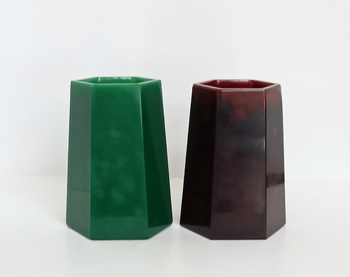 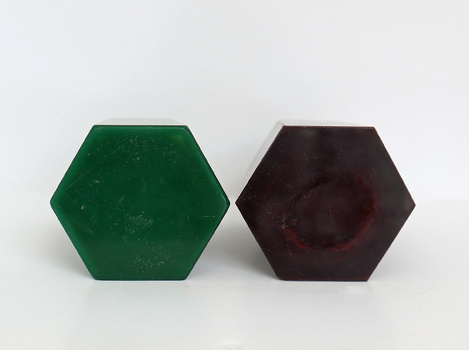 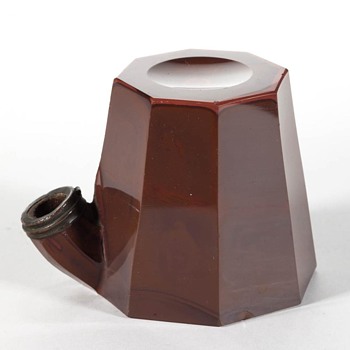 About a year ago, I posted the red vase on the right here on CW. I believed the vase was made by Rindskopf, but after finding a twin in green lithyaln glass, I am now not sure if these were made by Rindskopf or possibly by Egermann.

I have seen the red examples of this vase referred to as being Rindskopf’s Diluvium decor, but examples of Diluvium include a greenish-tan colored glass within the deep red. Some examples of Rindskopf’s use of geometric shapes similar to this one can be seen in the book Moderne Gläser by Gustav Pazaurek, 1901. (And also, just to note, Rindskopf’s diluvium is described in Pazaurek as being ‘rot- grünem’ or ‘red-green’.) I felt my red vase was Rindskopf's version of Lithyalin, a type of glass that imitated semi-precious stones that was invented by Friedrich Egermann.

However, when I found its green twin, I came to wonder if Rindskopf also made a green lithyalin type of glass, or if it could be by another maker such as Egermann. During research online I did find an example of a lithyalin cut red inkwell in a tea kettle shape (image 4) that was attributed to Egermann, but of course it is just an attribution, not proof. I did find the shape to be interestingly similar to my vases.

These vases are very glossy; the sides and edges are ground to be very sharp and precise. The pair stand 3-5/8” (9.2cm) tall.