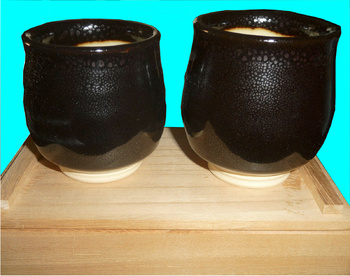 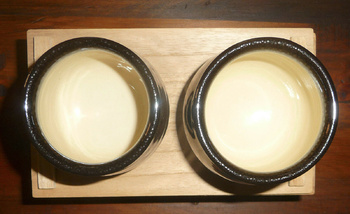 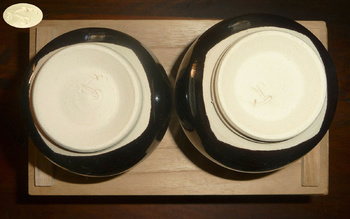 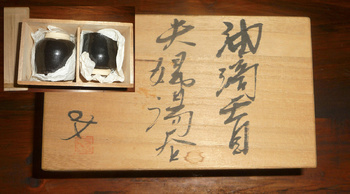 These yunomi are about 3.5" and 3.25" high and 3" in diameter, with hand signed tomobako and indistinctly signed bases. The glaze is a bit unusual as it stops in a rectangle at the base, which is unglazed. The substance of the glaze on these is interesting, too, an example of yuteki tenmoku which is how the dotted appearance was obtained. The exterior glaze is a dark plum color transitioning to a clear glaze on the interior which shows off the color of the clay. These yunomi are substantial, more like stoneware, which I have been looking for, as most of my recent finds have been porcelain or fine, thin ceramic.

I was told that this meoto yunomi set came from the Nara Prefecture in Japan circa 1993-1994. After some research, I think that they may have been made by the Akahada kiln, but my research is ongoing. Akahada ware is known for some distinctive painted designs in the glaze, especially of animals. I did find a few examples of subdued glazes as seen on these yunomi. This set was one of several gifts to an artist, a painter, when he first arrived in Japan. I am finding that vintage, unused meoto yunomi sets are fairly common which makes me suspect that new couples might often receive several sets as wedding presents and that they were also common gifts for other occasions, though this set is not vintage...

The link below contains an interesting and fun slideshow of the Akahada history and kiln: