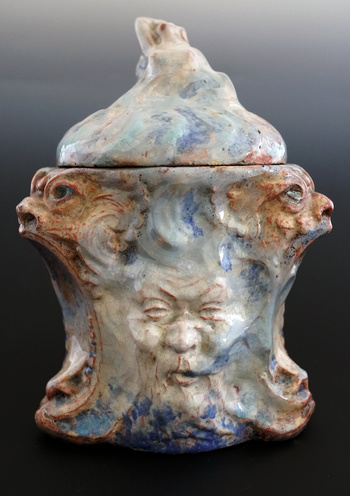 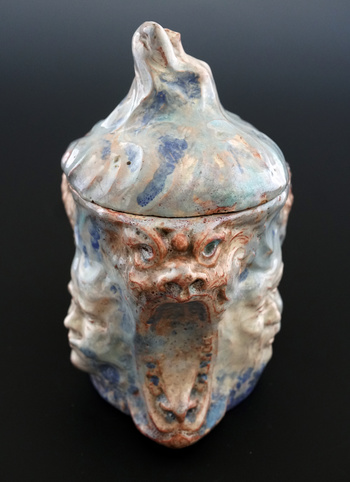 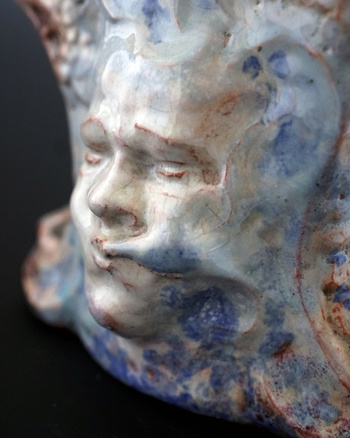 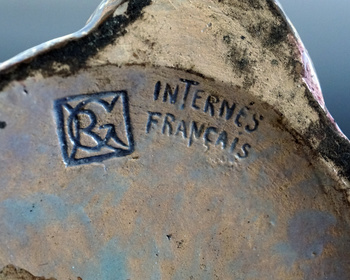 Given the antique market drive for “big name” pieces it is somewhat ironic that among a collection with some of those “big names,” what I consider to be one of the finest pieces in my collection is anonymous (or at least to this point lost to history). This tobacco jar, though in a minute I try to argue that it is an opium jar, was crafted between 1914 and 1919 by a very skilled ceramist French prisoner of war during World War I. An under-appreciated aspect of the “War to End all Wars” was the Swiss Government’s agreement to accept ~68,000 injured and/or sickly POWs from Germany, Belgium, France and Britain as part of a joint armistice agreement. POW transfer to Switzerland was not a fete accompli, as captured soldiers were pre-selected by Swiss doctors based upon the level of their physical and mental/neurological injuries and the prospect for rehabilitating into productive members of society. In direct contrast to the national reaction we see today to immigrants, the Swiss opened their country up with “welcome arms” to these POWs. Regions of Switzerland were pre-selected for housing of POWs largely by nationality, while their accommodations were generally provided by local hotels. Again, while there were POWs from multiple countries involved in WWI, it was the POWs of France that were the most numerous and organized themselves to the point of even having their own bi-weekly publication, “Journal des Internés Français: Hebdomadaire Illustré.” (see associated photo). These French POWs had opportunities to learn and apply themselves in a trade, of which ceramic arts was one option. Despite a bi-weekly journal and mention of regional art exhibitions, there is nearly a complete paucity of research and source material on the ceramic workshops of the “Internés Français.” As one can imagine, anything produced by POWs during this period is scarce at best and ceramic pieces of the caliber pictured here are almost unheard of, making this “pot de tabac” (or “pot d'opium”) exceedingly rare, if not unique (to date).

Now, on to the illicit drug motif argument. One can see from the jar that it is organized in an alternating cylindrical trefoil of exhaling males and wide-mouthed dragons. The painterly effect of the form and surface glaze clearly shows that exhaled smoke crosses the gaping mouths of the leering dragons. There is a not-so-subtle subtext that what is being exhaled is owned, in part, by fearsome demons and dragons. Opium was one of the cause célèbre vices of the fin de siecle, and it is far from implausible that physically injured and mentally damaged POWs would be immune from exposure to the drug, particularly given the state of medical science and the fledgling field of psychiatry. Opioids, of which opium is one, were appreciated for their analgesic effects by the medical profession as they struggled with increasing problems with combined war-related physical and mental illness. The appreciation of opioids also filtered into general society by way of the Orient, where opium was plentiful and long-established. In many ways the first “opioid crisis” of the modern age occurred from the 1860s to the fin de siecle period, but contrary to today it was romanticized in literature and art of the day by early adherents (e.g., Samuel Taylor Coleridge) and later symbolists and decadents, like Charles Pierre Baudelaire, Oscar Wilde and Jean Lorraine. While not quite the colloquium of the time, it is not implausible to propose that the motif of this jar is POWs “chasing the dragon” with a decidedly worldly goal of obtaining the dream-rendered female nude adorning the jar’s cap.

This exceedingly rare piece is well-marked underneath with impressed “Internés Français,” and a very stylized artist mark that appears to simultaneously show “RBG” (and possibly other letters). Despite the impressed marks and clear origin, the artist remains unknown. I would so love for this masterpiece of POW art and ceramic excellence to be reattached to its maker. Material: Gres with high-fired glaze. Dimensions: 7.5” (height) x ~5” (diameter).