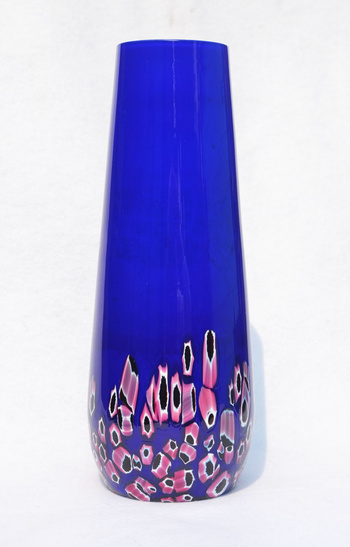 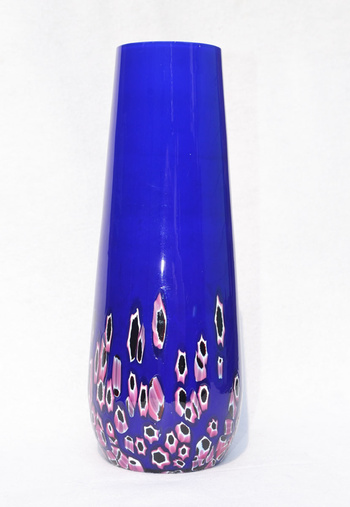 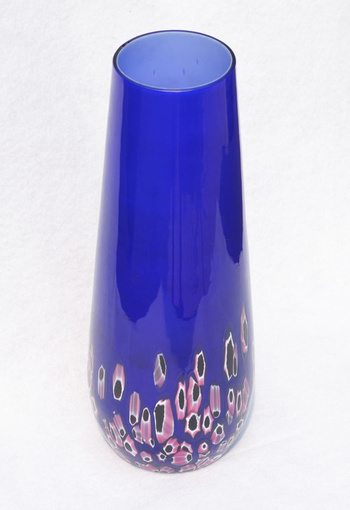 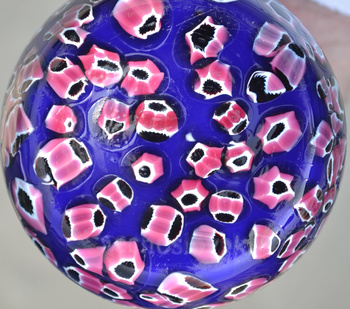 This protozoan décor has the ability to imply three-dimensional depth. The thin cane slices are actually marvered into the deep blue casing layer. The casing surrounds a white interior layer. The vase is 10” (25.4 cm) tall with a diameter of 3½” (9 cm) at the widest point. It has an acid-stamped straight-line “Czechoslovakia” export mark on the underside.

The hexagonal lavender-and-violet canes in this décor are seen in décors that have been usually attributed to Kralik but the recent accessibility to information about Steinwald shows, if nothing else, that Steinwald also used the exact same cane in some of their products. The shape of the vase is far from distinctive.

So, what about the mark? I've been told this mark has been identified as a Kralik mark but I've also been told never to base an attribution on the mark alone. I believe this mark does appear on some Kralik products but can't help but wonder if this mark may have been used on some Steinwald (and maybe other) products as well.

I used to believe that the marks would unlock all the secrets. I don't believe that anymore. This is an excerpt from an article in Journal of Glass Studies (Vol 23, 1981) titled “The Exportation of Bohemian Glass – A Historical Review” by Václav Lukás - “By the second half of the 17th Century, Czech glass makers had begun separating decorators and producers of glass. A guild for glass painters, engravers, and cutters had been organized on the Ceská Kamenice estate in Northern Bohemia a early as 1661. At the same time the sale of glass products became a separate function.” That implies to me that the marking of the products could just as easily be the responsibility of the seller as the manufacturer.

I'm leaving the attribution open to discussion on this piece.