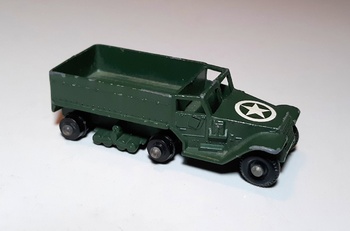 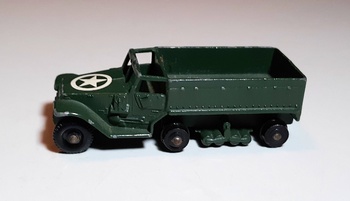 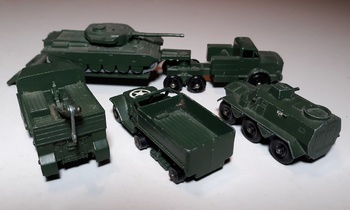 This is a poor little M3 Half Track missing its tracks so I gave it a bit help to spruce up the post. Just paid $2 for it but it was the only Matchbox I found that I didn't have.
Now as for this model it is an older casting that was first introduced in 1958. On the base it is marked No. 49 instead of MB 49 as later castings would be marked. Also it is called the M3 Personnel Carrier and is better known as the M3 Half Track of WWII fame. Later personnel carriers would be fully enclosed and either fully tracked or all wheels. The half track wasn't used much after WWII. American half tracks like this were four wheel drive. These were based on trucks and the rear wheels were replaced with a drive sprocket that drove the tracks.
Luckily there are people who make replacement parts for Matchbox models. I need to make a list of the parts I need for future Matchbox Monday posts.