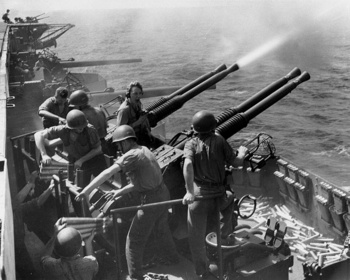 **THIS IS AN INERT ROUND!**
Ok, now that we got the disclaimer out of the way.

This is an item from my heavy mortar collection. I bought this probably 20 years ago from a local Craigslist ad.

Turned out the seller was a garbage man. This was back when they used to get out of the truck, dump the cans in the back and actuate the hydraulic compactor. He saw it before compacting and somehow realized it was inert. At the time I paid $20 for it.

BOFORS
Probably the best automatic cannon anti-aircraft weapon of World War II, Bofors guns of this type remained in service long after the war ended. This weapon was used on almost every major USA and UK warship of World War II and was a very potent AA gun.

The USN 40 mm/56 Mark 1 and 40 mm/56 Mark 2 Bofors guns were both water-cooled and were used for all twin and quad mountings. The Mark 1 was a left-hand weapon while the Mark 2 was a right-hand weapon. Except for the barrel assemblies, the components were not interchangeable. These weapons could be fired in single-shot or automatic mode via a selector switch on the side of the slide.

This is from a few years ago but it's very interesting.....
The U.S. Air Force is rebuilding tens of thousands of World War II-era cannon rounds specifically for the 40mm cannons on its AC-130U Spooky II. Though the service has long been looking to finally retire this particular part of the gunship’s arsenal, which has increasingly become a logistical nightmare, the aging guns have so far proven too effective to get rid of completely.