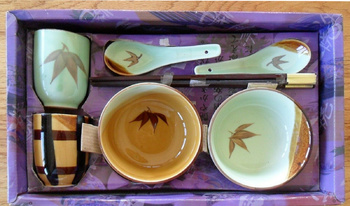 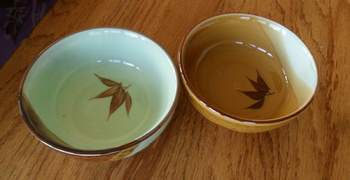 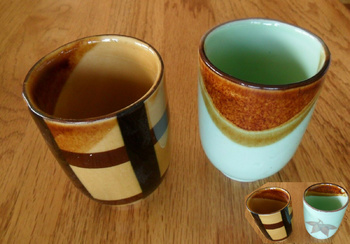 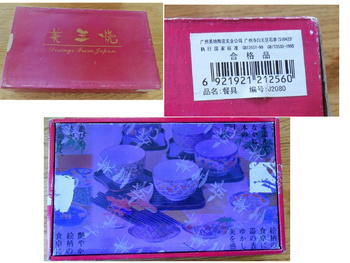 I don't have much information about this set, as I have not received it, yet. It consists of two tea cups, two rice bowls, two spoons and two sets of hardwood chopsticks, all in the original box. It was very inexpensive.

My interest was peaked for several reasons. The word "Design" is misspelled as "Desings" on the lid. I did do a Google search in case there was a Desings store or importer and found nothing to suggest that there was/is, so think it is a misspelling. It is a set for a man and a woman as one cup is larger than the other. I have not seen a boxed set like this before. It is also very Wabi-sabi in nature as everything has the same theme except for the man's tea cup. If the colors and the inner glaze of the cups were not so similar, I might have guessed the plaid cup was added to make up for a lost or broken cup. The seller said, though, that they received this set brand new, as a gift, but never used it. Finally, the colors are really nice, hand painted and, though it is not obvious, the pieces are decorated on all sides, from what I can see.

The seller is not communicative, so I don't know if any of the pieces are marked on the bottom, what year it was gifted or anything else about it. All of the text on the box that I have been able to decipher just refers to it as a couple's set, cute design, etc. Nothing in the text I have been able to translate mentions the maker or geographic origin. Very interesting set.