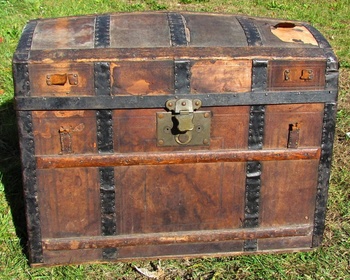 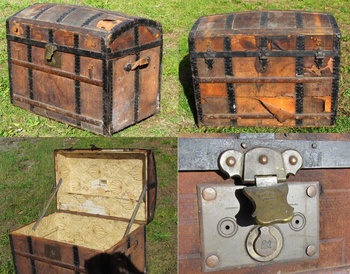 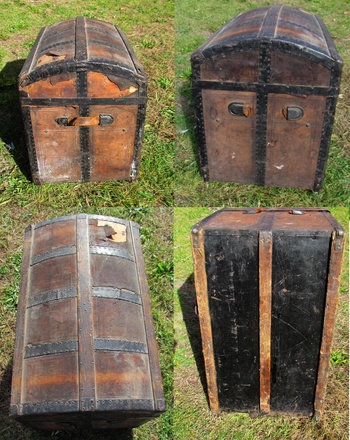 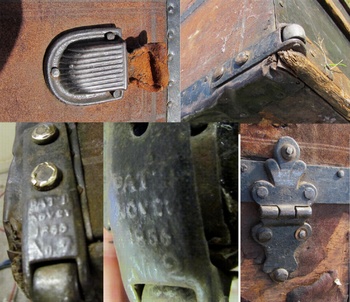 I was thrilled to come across this particular early 1870's leather barrel stave trunk with all its mid 1850's hardware. This particular one would have had the straps from the back, over the top to the front. Measures in at 32" Long x 20" Deep x 26" Tall. No real interior but for a 3 section lower lid compartment. Does have the original cloth ribbon lid stays. The original lining is linen then another layer added, which has an image applied to it ( the second layer). You can see it sticking out from underneath the third layer. I removed the top layer to find that this was a magazine cut out image. On the back of that image after removed revealed a tooth paste ad, which contained a date of 1883. I as hoping for a makers label as I didn't realize it had 3 layers I thought it was just two. It still maybe there somewhere under the second layer. Has the patented 1854 Conrad Liebrich Brass lock. It also has some great 1870 patented cast iron handle caps less one...tough find maybe for the fourth. The back ornate hinges are thick cast iron which was unexpected, but I was curious as what I would find as they weren't shown in the ad. The caster wheels I could see as being out of the norm and turned out to be patented Nov. 21 1856 #2 and all are present. I don't really see any markings on the hinges... maybe on the back side?? I hope you find it as interesting as I do.