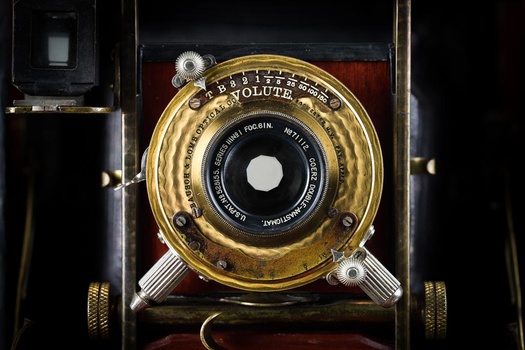 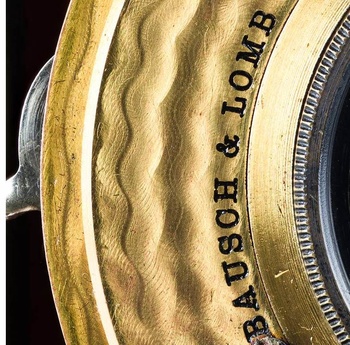 There was a time when shutters, a basic and required function, were mounted on the outside of camera bodies. Some makers took great pride in their creations and a few shutters were practically works of art. Occasionally I acquire a camera with a wonderful shutter; so also consider this a sneak peak into my next camera post.

I've seen and owned a lot of early shutters throughout my years of camera collecting and consider the brass version of the Volute as one of the most beautiful. The shutter's face is hand decorated with a wavy, engine-turned pattern. Light bouncing off the etched patterns gives the face a visually distinctive depth and iridescence. A couple other earlier makers did engine-turning on shutter faces, but the Volute's workmanship is, in my opinion, the nicest. The overall design gives the shutter a steampunk feel. (FWIW, the more common version is housed in aluminum.)

Made by Bausch & Lomb, it was marketed as the company's finest shutter with a top speed of 1/150th of a second: "... rapid enough for photographing athletes, race horses, etc., satisfactorily." Considering a lot of today's digital cameras easily exceed 1/4000th of a second, the Volute's fastest speed was still very respectable for the early 1900s. This particular shutter has a "PAT. APP'D." marking which makes it one of the earliest versions.

This shutter is mounted, as standard equipment, on a very rare 1902 Premo Supreme camera in which all of its brass hardware has hand-applied engine-turned decorating. But that's a future post.

Also ... it took me a couple days and now the shutter works nicely. 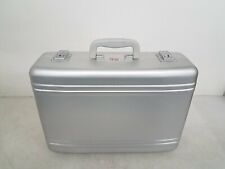