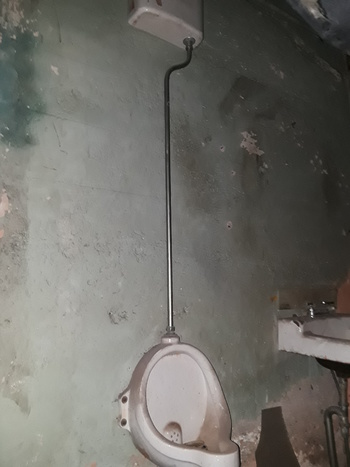 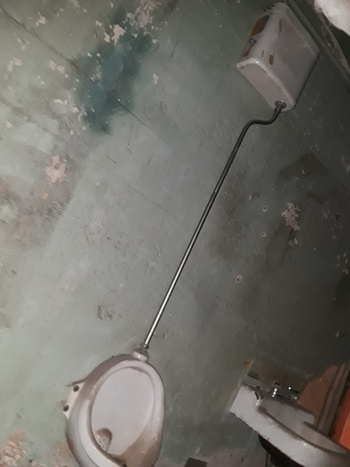 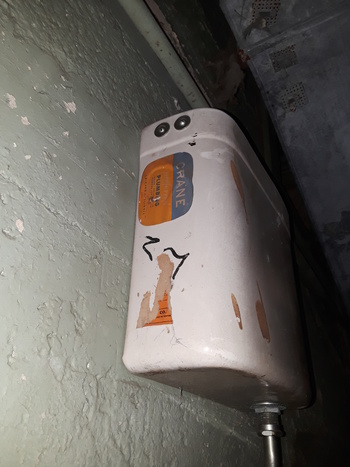 One more in the same church basement where the old car door lives...actually sorta right beside it but otherwise bolted up to the wall (no currently active plumbing attached, at a glance?) and otherwise one more thing that qualifies as "why did somebody *ever* install this there", probably before the car door got there beside it...???"

Yup, it's a urinal, with its water tank mounted on the wall above it. Next to it (barely seen in pic1/2) is an otherwise rather nondescript (if also slightly smaller than usual?) CRANE sink. Both still defy my imagination for how/why they ever got there -- no other evidence whatsoever that that basement room was ever intended to be a 'public restroom' but there they both are anyway. The pipe that otherwise connects the tank to the urinal *might* not be completely original to the rest of it, only because it now looks slightly too 'less rusty/etc'. As can be seen in pic 3, its tank still seems to have at least most of its original paper labels, the tank (like the sink beside it) also seems to be just slightly smaller than those now more commonly found attached to antique commodes. (and no, there isn't any remaining 'commode' itself there, nor actually evidence there was ever one to accompany it)