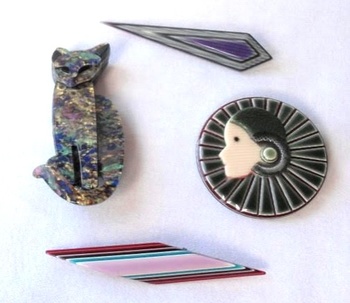 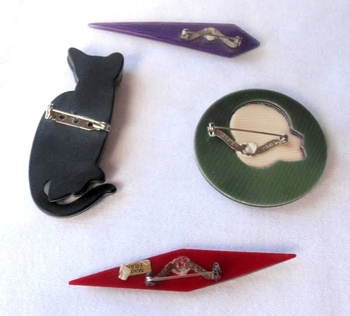 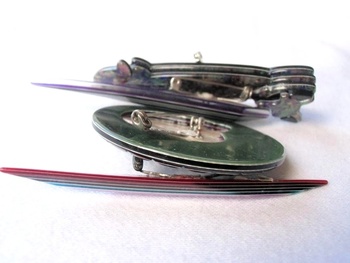 This all started for me a few months ago when Jenni, bought a fine Lea Stein Quarrelsome cat brooch, for us to appreciate, which brought back my own memories of having purchased one in Paris during a 1981 trip.

Since then I learned that my old brooch that looked like a farmer was called Benjamin, in greens and browns. That the quarrelsome cat name is a translation for 'chamaille', which has a slightly different meaning, more like a childish physical brawl, or brawler cat.

My little collection was acquired from France and England and the USA.

Some are obviously older than others, the cat here is a fake and was sold as Lea Stein STYLE quarrelsome cat, from Marseilles France.

Once I got the cat, I found the head was a little strange, with one pointy ear and one rounded, as well as the mat black back surface, and the assembled pieces which do not correspond in shape to the real cat design. I can provide a picture of the real back of this brooch if you want to compare them.

The history of the production of these brooches by Lea Stein starts in early 1960s to early 1980s, a break for 10 years, then a resumption of mostly the same brooches in various new color schemes till today, she has several retail contracts in European countries and USA as well as Australia, seems they are more popular now out of Europe than in.

The geometric layered rhodoid brooches were from the earlier period. The others I think may have been fabricated all along, as they were popular.