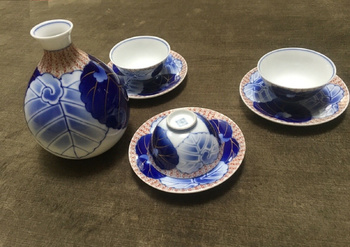 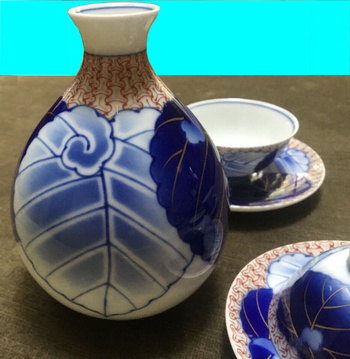 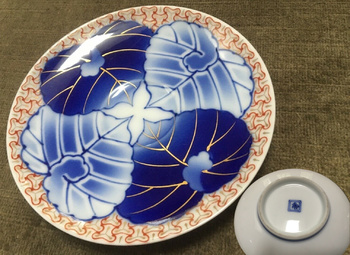 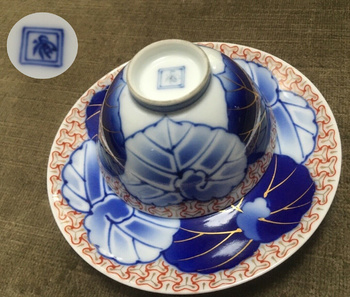 This Koransha sake set consists of a tokkuri (flask) which is four inches tall, four ochoko and five saucers. Just when I think I have seen the thinnest pottery I have ever seen, something thinner comes along. The ochoko in this set are paper thin and incredibly fragile and the tokkuri is only slightly thicker. The saucers are more substantial.

The seller originally had a set with two tokkuri and five cups and saucers but due to an unfortunate accident one tokkuri and one ochoko were destroyed. The seller was offering them as two sets, one with only two ochoko. I originally purchased only one set with a flask and three cups and saucers, but after the seller's accident, they very graciously threw in the surviving pieces from the other set for free, so I am using the extra saucer for the tokkuri. All of the pieces came from an estate sale. This is very fine, thin porcelain, so it is easy to understand how breakable these pieces are. No tomobako came with this set, which is disappointing and dangerous to their existence. I suspect that, when new, they came in a tomobako or they would not have survived this long.

As soon as I saw this set, I thought it was Fukagawa based on the painting until I saw the orchid stamp and realized the kiln that made these pieces was Koransha. The Gotheborg Japanese pottery site explains the relationship between the Fukagawa and Kornasha Kilns and dates the mark on these pieces to the 1920s or 1930s, but I am still trying to verify that. There is a great deal of confusion over dating these marks. Some folks appear to lump Koransha pottery under Fukagawa as a subset, but they are distinct kilns.

In Meiji 8th (1875) the porcelain potter and business man Ezaiemon Fukagawa (1833-1889), Fukaumi Suminosuke & his brother Takeji, Tsuji Katsuzo and Tezuka Kamenosuke founded a company named Scented Orchid Company or 'Koransha' and started to produce porcelain for export to Europe and America. In 1879, Fukaumi and other members left the company and Koransha was reestablished by Eizaemon alone. After his death in 1889, his oldest son, Yotaro succeeded the company while his second son, Fukagawa Chuji started the Fukagawa Porcelain Company. The orchid mark seems to have been used into modern times."