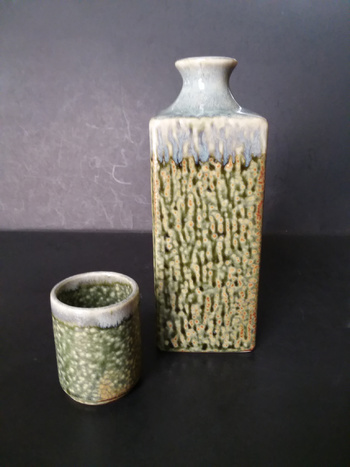 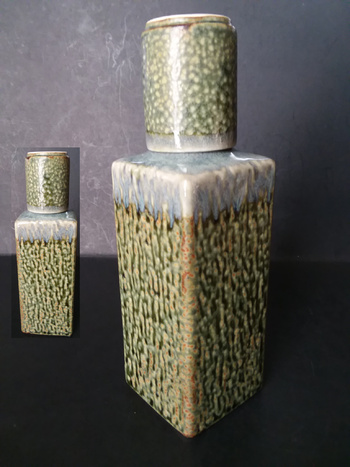 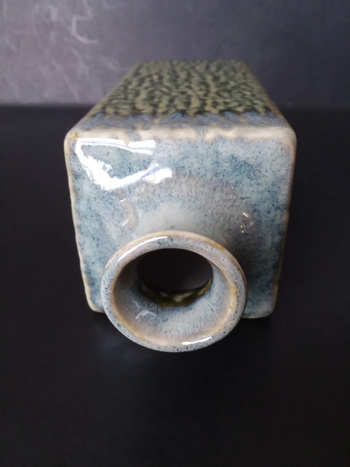 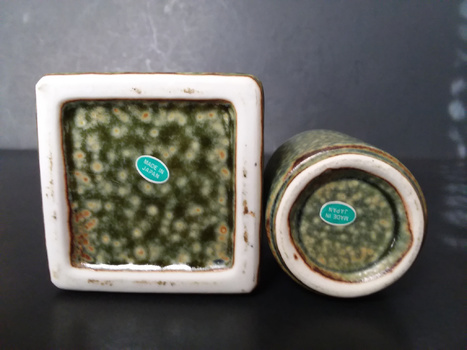 This sake set is composed of a flask (tokurri) and one cup (ochoko). The flask is 7.5" high and 2.25" square and the cup is 1.5" in diameter and 2" high. There is a "Made in Japan" sticker on the bottom. This one caught me off guard. I wasn't looking for any more sake sets, but first of all it reminded me of a bedside carafe and I really like those. The shape of the flask stopped me in my tracks, too, as I don't have any square flasks. Then the glaze colors grabbed me, the turquoise and green predominating, and kind of fighting each other, until I looked closer and saw the other greens, blues, browns and ivory colors mixed in. I also really like how the blue in the rim of the cup merges with the blue top of the sake flask when they are joined together and how the bit of brown around the base of the cup ties it back into the browns in the flask. It is an interesting set, no matter which side or angle it is viewed from. Also super cheap. Just a neat little set that I will use and admire while doing so. No idea of kiln or style. It is a bit of an odd ball due to the shape and colors.

I later found a boxed set of a similar flask and four cups with a Miya label on ebay. The seller claimed it was Mashiko ware. I found another set NIB with a Kafuh label. Confused.