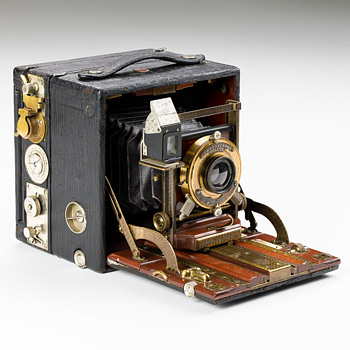 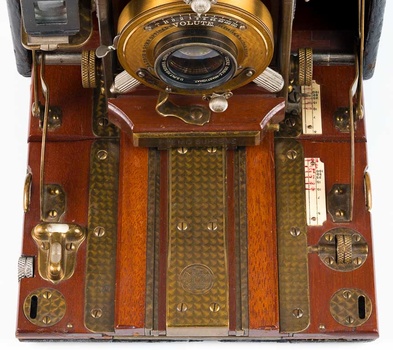 The variety of camera designs and model variations always surprises me. I enjoy self-casing, leather covered cameras from the 1890s onward even though polished wood and metal hardware are hidden inside of the bodies. It was only upon opening the cameras did makers’ construction know-how get put on full display. As time went on, the cameras became somewhat “utilitarian” as opposed to objects of beauty. Advanced features and construction using higher quality materials differentiated top-of-the-line apparatus from lower end models, but everything started looking the same.

But somewhere in all of this, ROC decided to create the ultimate top-of-the-line self-casing camera. Something that stood out from the competition with a combination of desirable features, highest quality materials, and decorations & details validating the maker’s expertise / craftsmanship.

ROC must have wanted to make a statement with its Premo Supreme (1902 to 1908). Construction and material quality are first rate with desired features and rarely seen decorating details. While decorating details don’t make better pictures, having all of these features together on a single camera must have made owners feel special or even privileged.

Visually, the camera has lots of mechanics which gives it a complex, steampunk appearance. The look is further heightened with hardware decorated using a hand-applied, engine-turning technique known as “perlage,” the same as what is seen on better watch movements. Perlage decorating is on all hardware surfaces (both sides) and does not appear on any other ROC camera to this extent. The catalogues do not mention if the work was done inhouse or by a third party.

Another rare feature, but not unique to cameras, is the Premo Supreme being sold with two separate shutters. The camera seems to say: “I am serious about picture taking.” An engine-turned brass Volute diaphragm shutter (posted separately here on CW) is mounted at the front and a removable Thornton Pickard (TP) focal plane shutter is positioned between the body and focusing ground glass. The purpose of the TP shutter is for photographing fast moving subjects.

High quality leathers are used on the camera. The body is covered in a genuine seal leather. The Premo Supreme bellows was only made with black leather bellows. This is probably because red-leather was thinner and quickly wore out. Catalogues note the bellows as “Black Persian Levant Leather.”