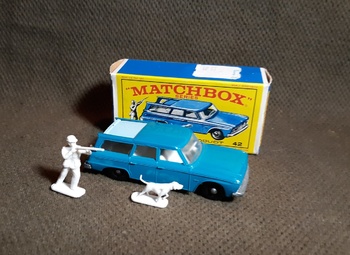 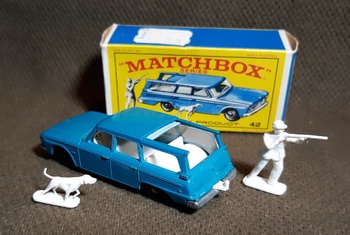 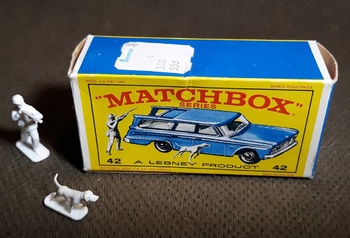 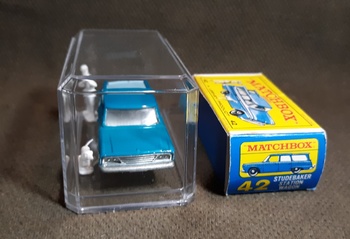 Not really maligned but new and improved as now I have the box which is an E style box. This model was made from 1965 through 1968.
Now as the box is the new improved part of the post there shall be a bit of box information. This is the E4 box. There were fur versions of this box. The difference is the end flaps. The first version just has text. The second version has a small white circle with a drawing of the model. Generally the drawing shows a special feature. This model has simulated suspension which is shown in the drawing for that box style. Next version has profile color picture of the model and the E4 has a larger picture. A bit of marketing there as Lesney makes maximum use of the end flap space. My sources don't say when the variations were made but my guess is 1967-1968.
There is a price tag on the top. It is Penny's and the price was 55 cents. This would be kept behind a counter usually to avoid theft.
The actual name of the car it is based on is the Studebaker Lark Wagonaire. The Petersen Museum in Los Angeles has one. It has the retractable roof like the model. Speaking of the model I put it in a plastic cube to keep from losing the dog and hunter it came with.
Next week will be Mercedes magic.