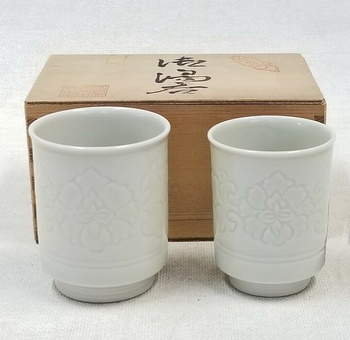 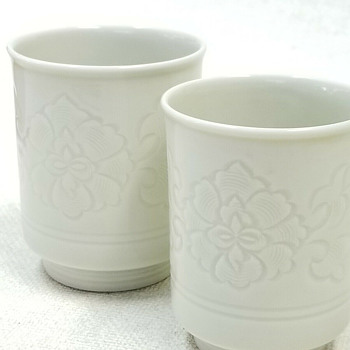 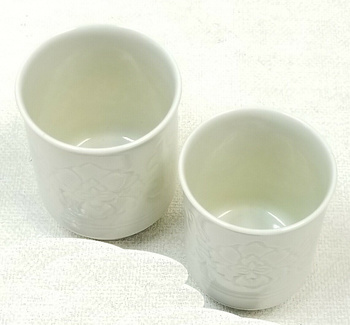 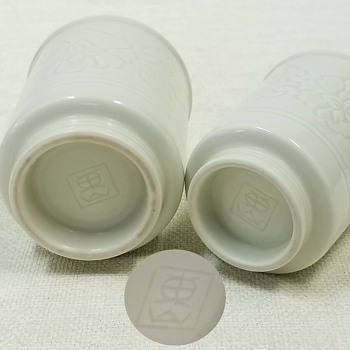 These yunomi are about 3.75" and 3.5" high x 2.75" in diameter. They come in a tomobako and are marked on the bottom. They are extremely thin white porcelain with an impressed design of flowers (peonies?) and leaves running completely around both cups. This set is supposedly unused but the tomobako shows signs of age, discoloration and scuffing from storage. They are Arita ware according to the seller, but they also attributed them to Higashiyama, which region I don't believe has anything to do with Arita pottery. The large cup was broken in shipping, so I have set it aside for kintsugi practice, or more likely until I am better at it and won't be experimenting so much.

I thought I was done for the month after robbing several liquor stores to pay for my recent Koransha vase purchase, but decided to mug a couple of old ladies to buy one more thing. Don't judge me! Actually, I bought this in an auction in Japan from a seller who does not appear to deal much in porcelain. There were three other bidders but the bids were well under $10 so I bid a bit over $10 and still got it for under $7 including tax and shipping. Yes expedited shipping from Japan was free! I suspect that the seller thought these would do much better, and they should have, but I don't know why they didn't as the set is quite nice. I suspect bidders were dubious that shipping would really be free, but I confirmed that with seller before bidding. I feel bad for the seller but respect that they carried through with no complaint and a very friendly and appreciative attitude. Great Seller! Meoto yunomi set #15 in my collection!