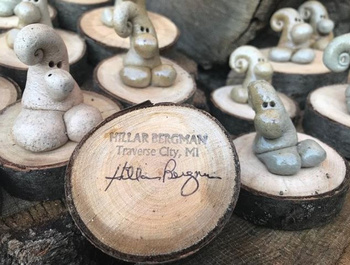 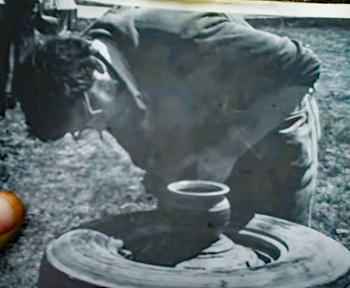 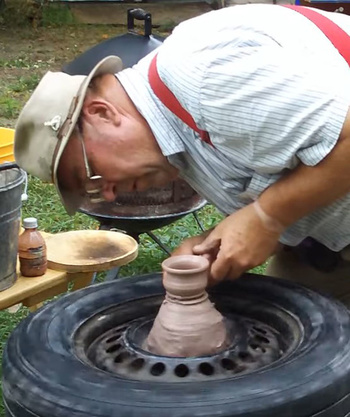 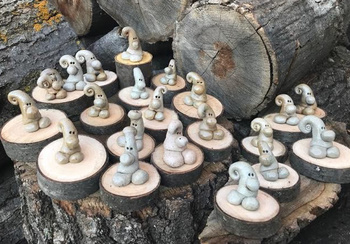 Hillar Bergman has been slicing up his yule logs to make individual ottomans for his Cone People. This latest batch is salt glazed and are gems of simplicity capable of expressing effortless wonderment.

From his outpost in Traverse City, Michigan, Bergman has been making pottery for quite a while. The black-and-white image is from an article in a 1979 issue of Studio Potter Magazine. You may notice that his potter's wheel is a car wheel. He would carry this to various art fairs and do demonstrations. It can be seen more clearly with a newer version in the next image, a capture from a YouTube video shot about three decades later. YouTube holds several videos where Bergman demonstrates how to make and use this spare tire wheel. Type his name into a YouTube search and, along with a couple dozen old-time fiddle tunes (multi-talented, that Hillar Bergman), you can watch his tutorials. There is nothing fancy about Bergman's work. It is American folk art without pretense. His creations are about curiosity and ingenuity with a little bit of joy thrown in – qualities that should be inspired in us all.

So, if the gods are willing and the streets get plowed and you find yourself wandering through downtown Traverse City this December when you hear Christmas carols being played by a curbside fiddler, seek out the source. He may just have some of these Cone People in the back of his van.