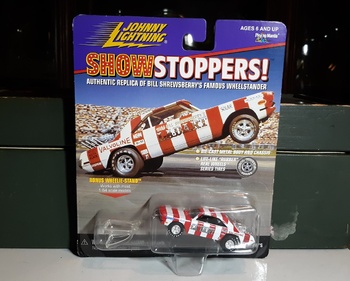 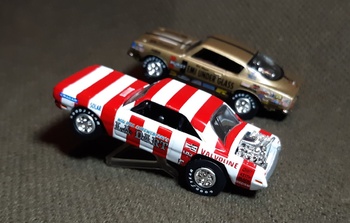 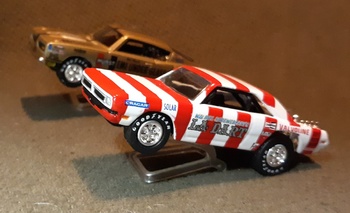 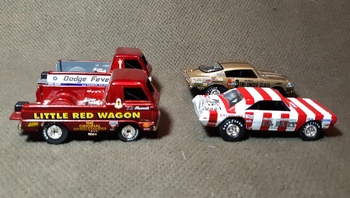 To answer the question how do they steer it is with the rear brakes. Wild Bill Shrewsberry was so good at it he would do the entire quarter mile wheels up and then turn around still wheels up and come back the other way. Plus there were holes in the floor to look through.
Wheelstanders were exhibition cars which meant they were paid to show up and did not have to compete. Plus they had sponsors but not like today where one big sponsor and the car would be the Hostess car instead of the L.A. Dart. This was around late 1960s to early 1970s for the model here.
As for the model it is 1/64 scale which is standard for diecast cars like Matchbox and Hot Wheels. This one is from the late 1990s reboot of Johnny Lightning. At the time they were the best diecast cars made. This one has a stand to make it do a wheelie. I have it with the Hemi Under Glass in photos 2 and 3. In photo #4 It is joined with the Little Red Wagon and Dodge Fever.
I am thinking tomorrow more Route 66 so stay tuned for that.