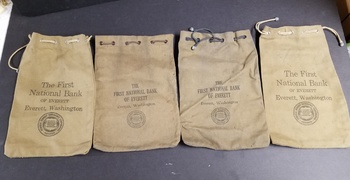 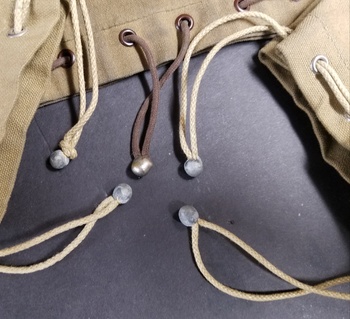 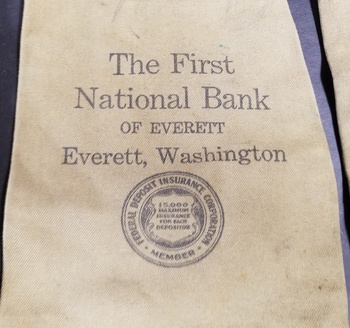 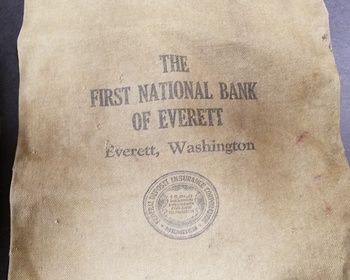 I've had this collection of bank bags for a long time. They are from the First National Bank of Everett Washington. They have the FDIC mark on them.

You can see the different fonts on the bags. I assume indicating different years.

FDIC
Federal Deposit Insurance Corporation (FDIC), independent U.S. government corporation created under authority of the Banking Act of 1933 (also known as the Glass-Steagall Act), with the responsibility to insure bank deposits in eligible banks against loss in the event of a bank failure and to regulate certain banking.

FIRST NATIONAL BANK OF EVERETT
(The good, the bad & the ugly)

William Butler never headed a North Waterfront mill. As Everett’s all-powerful banker, however, he controlled the destinies of men and mills.
He had a Columbia University mining degree and arrived in Everett to help build and operate a smelter for the Rockefeller interests.
He began acquiring bank stock and eventually left the smelter to become president of Everett’s First National Bank in 1901. The bank merged with American National Bank in 1909 and William Butler remained president of the resulting First National and Everett Trust and Savings Company, a fully owned American subsidiary.

THE UGLY
He was quite the Tycoon back in the days. He was reported to have a signifiant interest in at least 65 mills and logging companies in the city and county. His control was so much that he manipulated finances and even controlled the newspaper stories. Not a bad word was ever posted about him.
THE BAD
Reportedly, no news about him went into the local paper without his approval, and no companies came into the community without his sanction.
THE GOOD
He was instrumental in keeping every Snohomish County bank afloat through the Great Depression of the 1930s, and he was a generous supporter of Everett’s General Hospital. He personally balanced the hospital’s budget during the lean years and left a significant bequest upon his death.