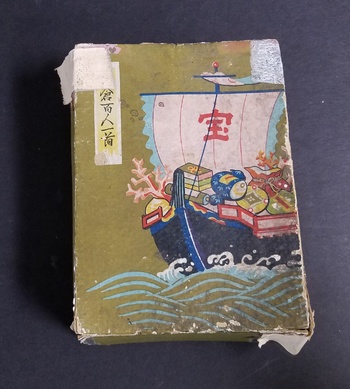 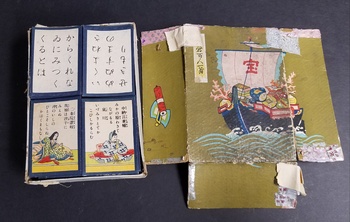 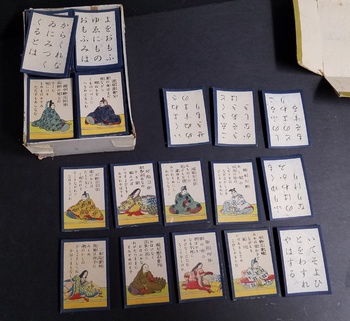 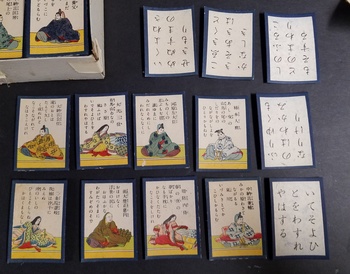 This card game belonged to my mother and we found it while going through some of her things. The box top is not in good shape but this is a very old set.

Uta-garuta (Poetry Karuta) is a type of a deck of karuta, Japanese traditional playing cards. A set of uta-garuta contains 100 cards, with a waka poem written on each. Uta-garuta is also the name of the game in which the deck is used. The standard collection of poems used is the Hyakunin Isshu, chosen by poet Fujiwara no Teika in the Heian period, which is often also used as the name of the game.

HOW TO PLAY
The game uses two types of cards.

Yomifuda (lit. "Reading Cards"): One hundred cards with a figure of a person, their name, and a complete poem by them on each.
Torifuda (lit. "Grabbing Cards"): One hundred cards with only the finishing phrases of the poems on each.
The game is played with the players seated on the floor. At the start of a game, 100 torifuda are neatly arranged on the floor face up between the players. When the reader starts reading out a poem on the yomifuda, the players quickly search for the torifuda on which the corresponding final phrase is written.

There are two ways to play the game based on the rules above.