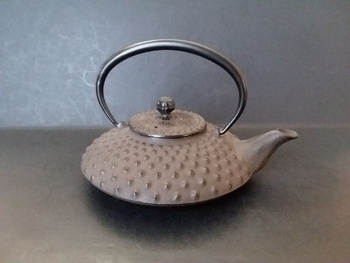 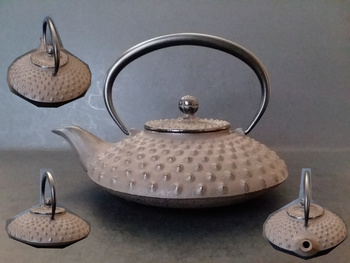 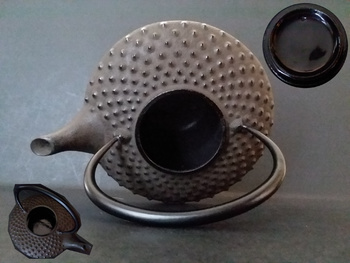 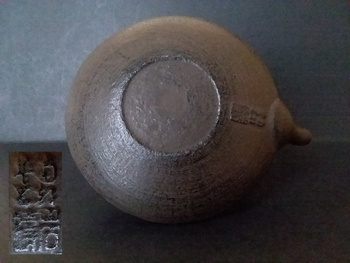 This small Iwachu tetsu kyusu (cast iron teapot), not counting the spout and lid, is only 3" high x 6" diameter. It is marked pretty clearly on the bottom. It is lined in enamel, so that multiple types of tea may be brewed in it. As with pewter, if not lined, a pot should be devoted to only one type of tea. I have several un-lined pewter pots from my early tea experimentation days for this reason.

These small pots are used only to accept heated water for brewing tea, not for heating water over a flame. This pot has never been used and is new but about 30 years old, pre 1990. Based on identifications of this maker's mark in a couple of on line auctions which included the original packing materials, this teapot was made by the Iwachu Foundry in Morioka City, located in Iwate Prefecture. Current production Iwachu has a different mark which consists of only the bottom four characters used on this pot. So far, I have found the upper four characters only on Showa era pots. Iwachu calls this design "Hailstone".

These small, flat kyusu are also sometimes marketed as sake warmers, which are called choshi, but the handle configuration is different than that seen on traditional choshi. On the side of that identification, however, is the fact that this never used pot did not come with an infuser.

"Outside Japan, a frequently seen variant is a cast-iron teapot that outwardly resembles a tetsubin. This type of teapot is glazed with enamel on the inside to make it more practical for tea brewing, though it can't be used to heat water because that would break the enamel coating. In the west, these teapots are commonly referred to as tetsubin, although the Japanese call them "tetsu kyusu", or iron teapot, to make a distinction from the kettle. Cast-iron teapots often come with a tea strainer that fits inside."

This is one other thing that I have been specifically looking for for my collection of Japanese metal ware. I have looked at a lot of different teapots but kept coming back to this one which is another piece from the collection of the professor who lived in Japan in the 1990s and sent things he liked back to the States. It is a bit unclear to me at this point if he did this to sell or to collect, or both, as most of the items were unique. There were only multiples of the fish okimono which I posted recently. He may have started collecting and then started selling his collection. At any rate, because of that I can roughly date this to no later than about 1990 and be certain that it is Japanese. There is a lot of Chinese cast iron masquerading as Japanese on the market and I am not experienced enough to differentiate between the two in many cases. Everything that came from this source has been Japanese and of very high quality, especially the tea ware, so I decided to play it safe and go with this one which I also like. During my research, I later found another example of this pot with a Mitsukoshi department store label which confirms my suspicions about the quality of this piece.

Mitsukoshi LTD is a high end Japanese department store which was founded in 1673. Everything which I have found associated with this store is very high end, especially the tea ware. The seller of this pot, and five similarly marked cast iron cups, guesstimated it to be 1970s vintage:

I added it to my pile as I will use it since it is already broken in and I wanted to get a close look at the cups. I suspect this set originally had a tomobako which has gone missing.

My next mission is to find a nice tetsubin, or kettle, for heating water. That promises to be much more challenging and expensive. 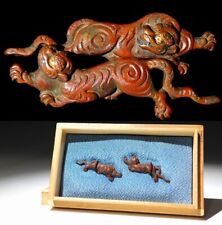