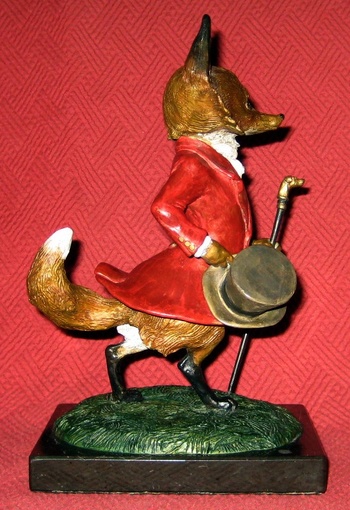 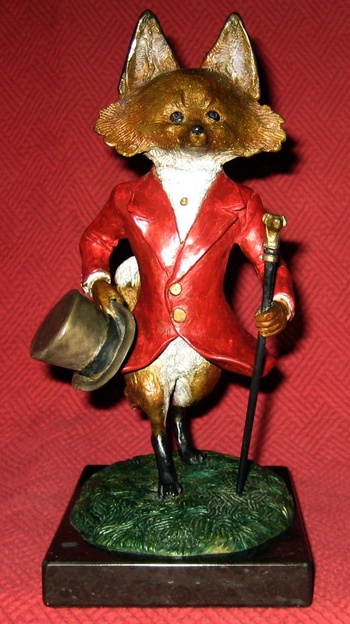 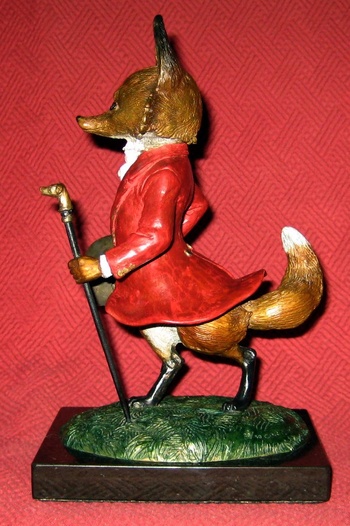 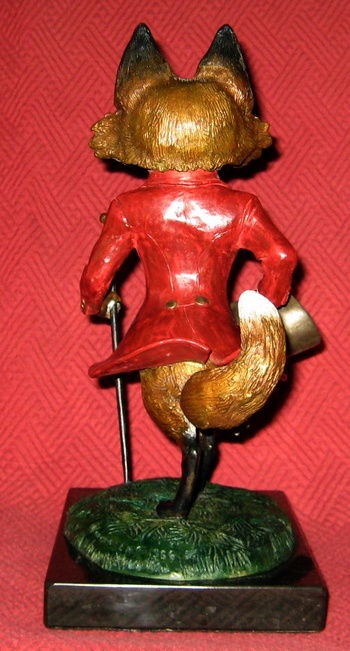 Hello everyone!!
This is a very limited edition bronze sculpture by artist Jenness Cortez. It's titled "Master Of The Fox Hounds". It's incredibly detailed and it's solid bronze, with the exception of the marble base. It is signed and numbered 28/50. I feel very fortunate to have this in my collection as these sculptures are extremely difficult to come by as there were only 50 ever made. It's dated 1986, stands approximately 9" tall (including base) and 5" front to back. For it to be so small, it's quite heavy and weighs 6lbs. I have a few fox related items in my collection that I'll post over the next couple of weeks. Here's a bit of Jenness Cortez's history:
Artist Jenness Cortez is a distinguished figure in the contemporary revival of classical realist painting.

She was born in Indiana in 1944 and exhibited a very early talent for art. As a teenager, she took private lessons with Antonius Raemaekers, a well-trained Dutch-born painter and superb teacher whose early instruction continues to influence her work. By choosing to study at the Herron School of Art, one of the oldest independent professional schools of art in America, Cortez received a rigorous five year training in all technical aspects of art making. To add to her store of technical mastery, Cortez then went to New York to study at the Art Students League under yet another gifted teacher, Arnold Blanch, whose influence on the young art student was profound.

Throughout her remarkable career Cortez has become proficient in a variety of subject matter including sporting and wildlife art, contemporary art, landscape, portraiture, interiors and still-life. Early in her career she worked as an editorial illustrator and etcher, then returned to her love of painting, with animals as her primary subject matter. For twenty years (1977-1996), became world renown for skillfully portraying horses most notably, thoroughbred racehorses. In the mid-1990s a growing interest in again broadening the challenges of her work inspired Cortez to move from horses to landscapes, and then to cityscapes and at last to interiors and still life painting where her focus remains today.

At the beginning of the 21st century, Cortez began concentrating on a form of still life painting inspired by the age-old tradition of “art in art.” In 2003, the “Homage to the Creative Spirit” series became her primary mode of expression. This tradition was most notably employed by such 17th-century Dutch artists as Johannes Vermeer, usually to impart a hidden meaning to astute viewers. Similarly, Cortez’s paintings offer layered meanings built on specific themes. She starts with an iconic masterwork and surrounds it with meticulously rendered book covers, photographs, sculpture, antiques, and other objects with cultural or historic significance. Each intricate Cortez creation challenges the viewers’ intellectual curiosity and celebrates the sheer pleasure of beautiful painting. In this work, Cortez plays author, architect, visual journalist, art historian, curator and pundit to help open our eyes to what we might otherwise have overlooked or taken for granted. Each painting presents a specific theme, mixing straightforward cues and obscure allusions, complemented by references to other artists’ lives and times. Each of her works touches upon important questions about the nature of painting and the significance of art objects, and presents subtle shades of meaning that invite contemplation. By depicting iconic artworks in her own paintings, Cortez underscores a classic paradox of realism: the painting as a “window” into an imagined space, and as a physical object; both a metaphysical presence and a material entity.

Jenness Cortez has been exhibiting her work since 1975, and has had more than 40 solo shows throughout the United States. Her work is in numerous public and private collections including those of the New York State Museum, Skidmore College, SUNY Empire State College, Presidents Ronald Reagan and Bill Clinton, and HM Queen Elizabeth, II.

Thanks for stopping in!!!