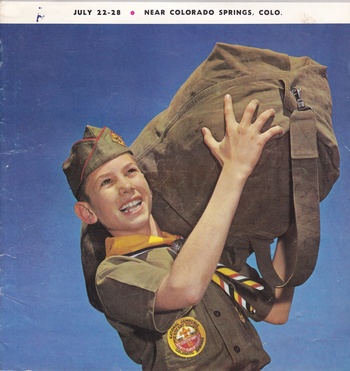 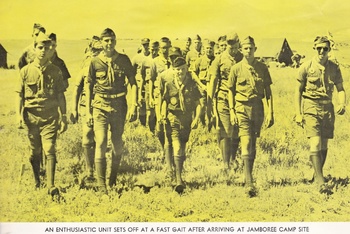 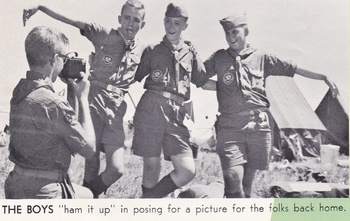 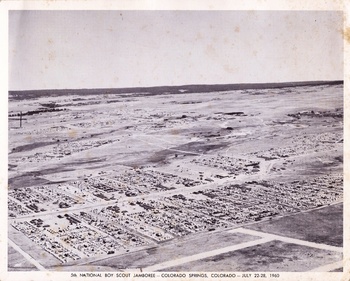 From the 1960 Boy Scout Jamboree. This was 55,000 scouts in a 2000 acre tent city. As can be seen by the aerial photo in fig. 4. The booklet is 8 pages and there are three 8"x10" glossy photos included. All of those are aerial views of the camp.
This jamboree what quite the deal as it was the 50th anniversary of the Boy Scouts of America. That was probably the biggest occasion in Boy Scout history as scouting was at a peak at that time. There are many Boy Scout Patches to commentate the occasion.
Starting off is the cover featuring what appears to be a Scout 2nd class, no patrol patch. I shall have to see when patrol patches were first used. The cover is about 11"x9" and luckily fits in my scanner.
The next two photos are excerpts from the booklet. The first who are said to be at fast gait seem actually to be marching smartly. Would be interesting to see if they know how to do a marching turn. The other photo is a photo of someone taking a photo. The boy on the right is excused from the chorus line.
Last is the aerial view of the camp. It seems to be quite nice.
There is more to come from this for a couple more weeks of scout posts at least.