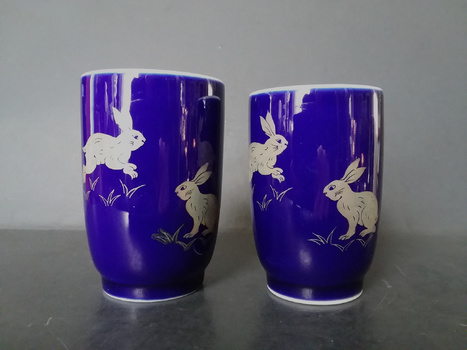 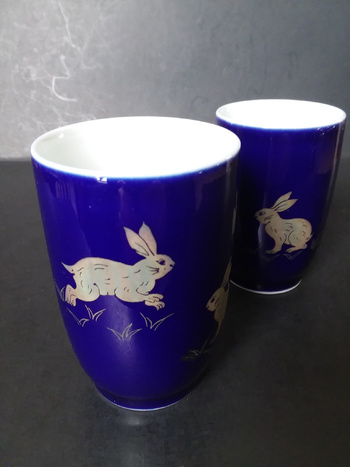 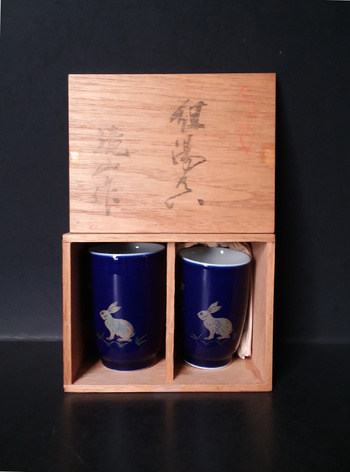 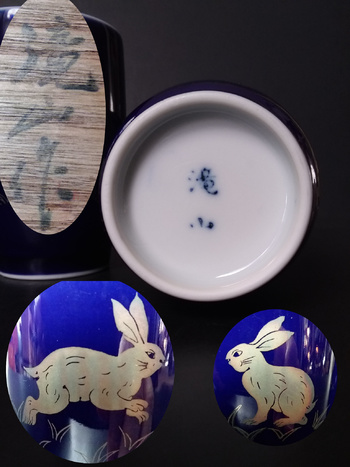 These yunomi are 3.5" high x 2.375" top diameter and the other is 3.25" high x 2.125" top diameter. The rabbits are transfers and the marks on the bottoms are so incomplete as to be illegible. The set did come with a tomobako, however it is about as rough as one gets. The porcelain is very nice, though. My guess is someone bought some fairly nice porcelain blanks and proceeded to crank out a bunch of meoto yunomi sets for the Year of the Rabbit maybe in 1999 or 2011? The lid of the tomobako does contain the mark of the kiln, shown on the base of the cups. They are the top two symbols shown in the closeup in image 4. The third symbol may be the name of the potter or decorator.

I found this set on an online auction site where the seller claimed they were Fukugawa, but their images were very poor and I could not make out the kiln mark. I was about 99.7352% certain they were not by Fukugawa, though. The seller's concept of what meoto yunomi sets are was also vague and inaccurate verging on hilarious. That being said this set was very inexpensive so I bought it because I have had rabbits on the brain lately and I wanted to get a closer look at the maker's mark. Luckily it is legible on the tomobako lid since it is not legible on either cup.

My images are not great as it was very sunny on the day when I took them, so the colors are washed out. They are a very nice, deep blue, and the transfers are composed of several colors. I may try to get a better image of the pair on a darker day...