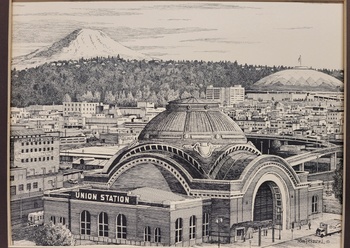 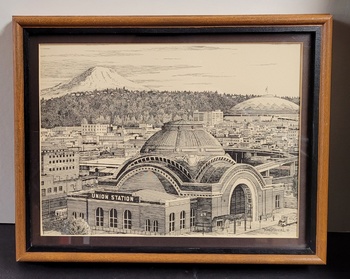 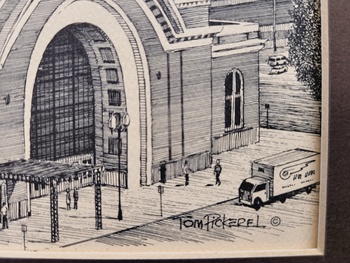 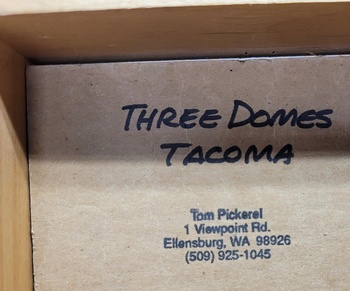 This is a nice print of a line drawing. This is downtown Tacoma Washington. The view shows the Union Station, Mt. Rainier and the Tacoma Dome.

If you kept traveling in that direction, you'd fly over my house in the neighboring town.

UNION STATION
The city's first rail station was built in 1883, then moved to the site of the present Union Station on Pacific Avenue and enlarged in 1892. In 1906 the architectural firm of Reed and Stem was selected to design a new station more befitting Tacoma's image as a prosperous, thriving metropolis and railway terminus of the Northwest.

Construction of Union Station began in 1909 and was completed on May 1, 191..now houses th U.S. Court House.

After winning an international design competition, local architects McGranahan and Messenger completed the Tacoma Dome at a cost of $44 million; it opened on April 21, 1983.

TOM PICKEREL
From his obit:
"Pickerel was the Kittitas County Planner at a time of significant transition in the county in the 1970s to early 1990s as the timber industry dwindled and increased pressures were felt on forest and agricultural lands. There were similarities between what he valued as an artist and as a planner.

His knack for capturing enduring images endeared him to people looking for art that represented the community in which they lived both for their homes are for gifts to loved ones who moved away and wanted reminders of what they left behind."